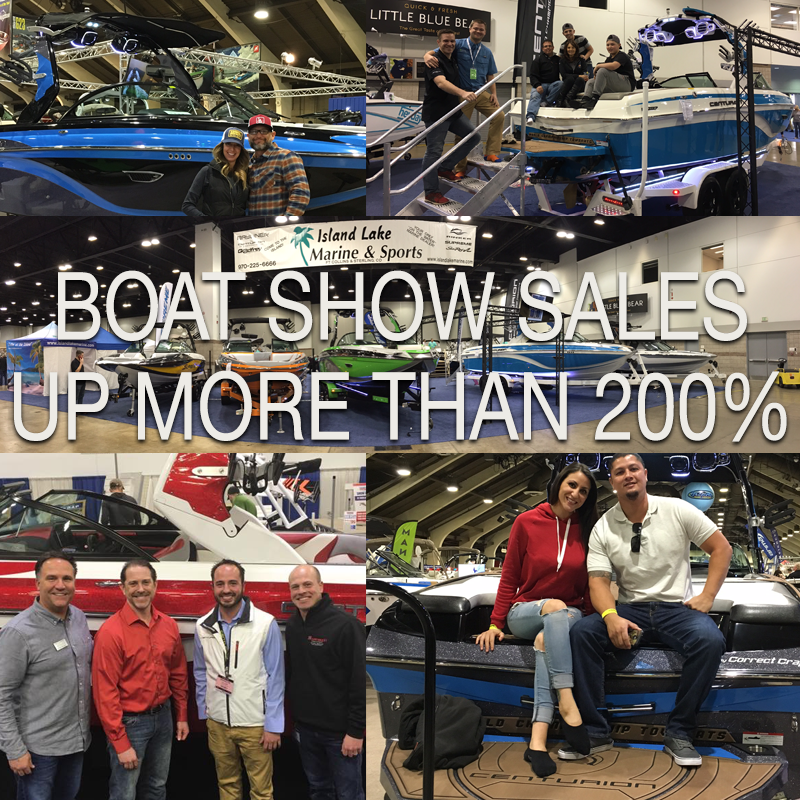 MERCED, CA (January 27, 2017) – The first three weekends of the 2017 show season have resulted in a more than 200% retail sales climb for Centurion Boats compared to last year. The Centurion Ri Series is producing record sales even early in the show season. Many show goers are coming to see the new nearly 26-foot 2017 Centurion Ri257, pushing this massive towboat’s retail sales to double what the company had anticipated. Even those who do not choose the new Ri257, seem to be purchasing the Ri237 or Ri217 for the World’s best waves, wakes and ride in the size class they desire. If early Centurion boat shows are any indication, this Correct Craft Company is on pace for more amazing growth in 2017.

The Centurion Ri257 is the next “big” thing in water sports boats. This statement is proven with the record sales we are already seeing at boat shows. This new Ri257 has all the advantages of a 26-foot boat in waves, wakes and accommodations, but none of the drawbacks. Flexible seating configurations, maximum water-displacement hull design, 5550 pounds of available factory ballast and the available QuickSurf Pro Surf system make the Ri257 the best surfing boat ever created. Comfy in rough water, big enough for a crowd of 18 and all the necessary equipment and amenities, you’ll never want to go home when you have the Ri257.

The workhorse of the Centurion Ri line is the Ri237. It is the best selling Centurion year-to-date and seems to be gaining momentum in 2017. This nearly 24-foot boat accommodates 16 people and as much as 5100-pound ballast with room to spare. It simply dwarfs competitors with similar specs. The official towboat of the Centurion World Wake Surfing Championship, the Ri237 offers the best waves and softest ride possible. Plus, its unique, eye-catching exterior is as handsome as it is hangout-ready.

The Centurion Ri217 is just now coming into its own. This versatile towboat is making Centurion fans out of even the most competitor-loyal boat buyers. Whether you prefer driving, boarding or surfing, one session with the Ri217 will be enough to make you a believer in this world class boat. That’s what happened when the International Waterski & Wakeboard Federation (IWWF) tested it. They chose the Ri Series as the Official Towboat of the IWWF Wakeboard Worlds.

Witness the momentum of the Centurion Ri Series at a boat show near you and take advantage of the World’s Best Waves, Wakes & Ride Promotion.

About Centurion Boats: Innovation has always been the hallmark of Centurion boats. Now, thanks to new product, leadership and Correct Craft company culture, innovation is running deeper than ever, into a re-imagination of the Centurion brand. Water sports enthusiasts are embracing Centurion boats for the world’s best waves, wakes and ride, as well as ambitious design and inspired craftsmanship. Time to re-imagine your ride, in a Centurion. www.centurionboats.com.