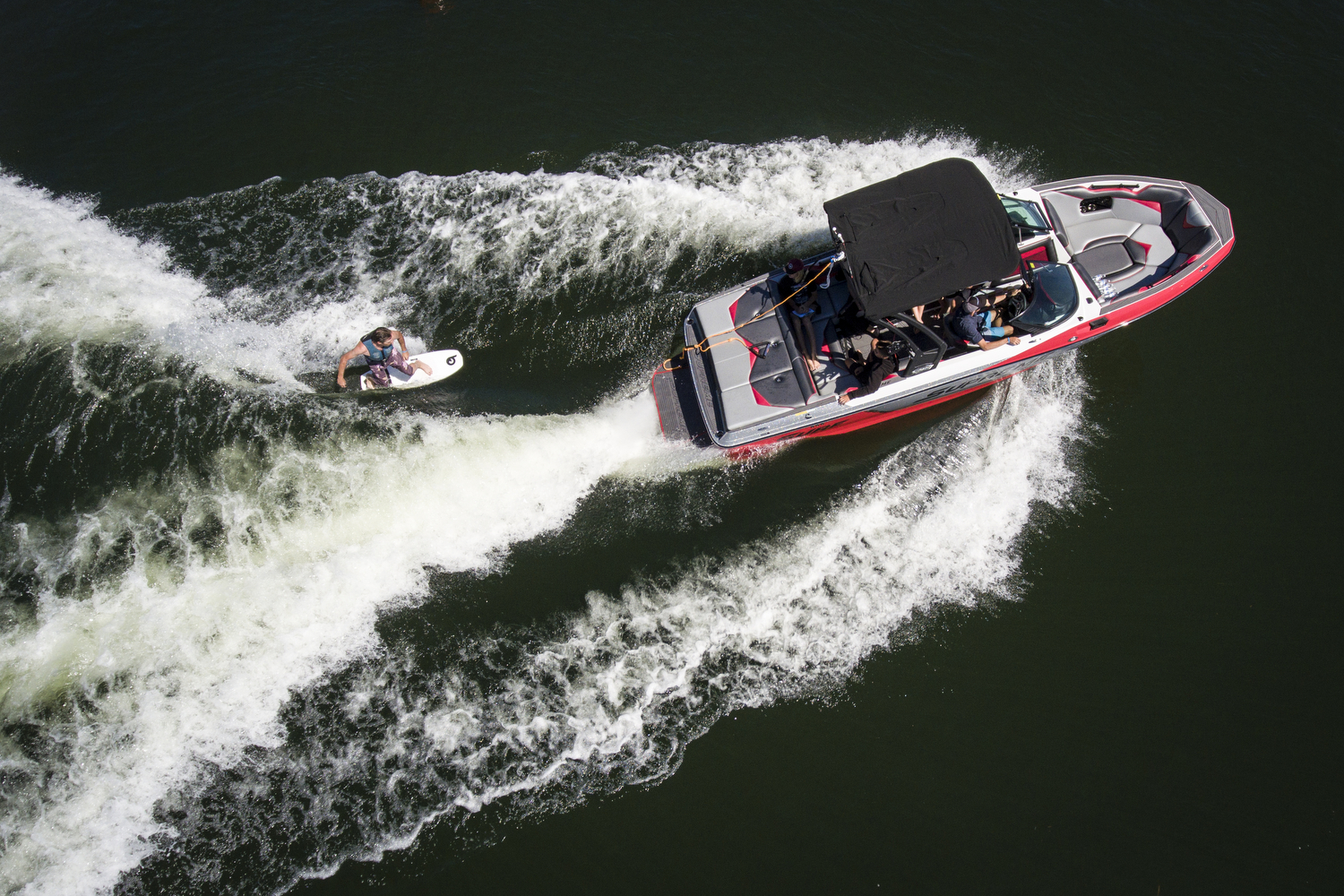 MONROE, WA (July 20, 2017) – Competitors at the 9th annual 2017 Northwest Wake Surf Open presented by Supreme Boats really enjoyed their ride behind the Supreme S238, the only affordable premium towboat on the water. Participants from amateur to pro level were propelled to incredible performances by the S238’s surf wave on Lake Tye in Monroe, WA. Many competitors posted their best runs ever especially in a competition this year. These monumental performances along with an amazing venue and 4 days of well orchestrated fun by the INT League, made the 2017 Supreme Wake Surfing Championship (SWSC) one of the most successful Northwest Wake Surf Opens to date.

The pro divisions were extremely exciting to watch as everyone brought their best to compete behind the Supreme S238. Centurion Boats Pro Wake Surfer, Britney Nyrose laid down an amazing finals skim run on Sunday earning first place in the Pro Female Skim division. Ashley Kidd who also rides for Centurion Boats nailed her finals performance behind the S238 earning the top spot in Pro Female Surf. Aaron Witherell amazed the judges in both the Pro Male Skim and Surf taking home first place in these two divisions.

Other notable winning performances included Nicole Hudson, who told us she had her best skim run ever behind the S238 earning first place in Outlaw Female Skim. Lily Anderson earned the top spot in Outlaw Female Surf, while Drew Drennan decided he wanted both Outlaw Male Skim and Surf so he took both titles home. Way to go Drew!

Supreme helps families enjoy their time on the water no matter what water sport they gravitate towards, but if your family is into wake surfing the fun ramps up to championship levels behind the S238. Just ask the competitors that rode behind the S238s at the Supreme Wake Surfing Championship. Provided by Seattle-area Supreme Boats Dealer, Lynnwood Motoplex, the S238 towboats were a huge hit. As the only affordable premium towboats on the water, Supreme Boats don’t really fit in a cookie cutter industry segment. These boats are segment-defining with the extreme value of a value class tow boat along with high performing waves, wakes and ride in addition to cool style.

The Supreme S238 was the official towboat of the 2017 Supreme Wake Surfing Championship for a number of reasons. This 24-foot modified-v bow has plenty of comfortable room for judges, scorekeepers and anyone else fortunate enough to see the tournament action from inside the boat. The premium performance of the S238 starts at water level with a modified deep-v hull. Designed to create strong pushy well-defined waves and wakes, the modified deep-v needs less ballast to displace the hull while offering an amazing rough water ride. The QuickFill ballast system floods in 2 minutes joining the 2-second wave transfer of QuickSurf to create an immediate surf wave on either side while weighted equally. With as much as 2700 pounds of ballast available the S238’s performance can be customized to help you enjoy your ride. The only affordable premium towboat is built to make you happy no matter how you live your lake life.

Performance and value are hallmarks of Supreme, but the cool style of the boats is what elevates this brand above the value class. The premium distinction of this brand becomes evident at first glance. The look of the Octo Tower by Skylon is substantial, but stylish. The Supreme SportShield® windshield gives the S238 an aggressive look with textured branded a-pillars as well as adding the water sports advantages of a cropped windshield. The pristine gel coat finish is painstakingly applied to create a deep beautiful shine. On the inside the S238 is no less impressive with high quality Spradling Marine Vinyl stitched together with Gore Tenera Thread by GORETEX®. The hand-covered dash shroud surrounds the intuitive SeeTouch® screen with standard ZeroOff® GPS Speed Control along with control and monitoring of all other Supreme systems.

The enjoyment competitor and spectators experienced from the on-water action was only part of the draw this year at the 2017 Northwest Wake Surf Open presented by Supreme Boats. Organized by the INT League, the event began with a Pass the Handle (#PassTheHandle) day designed to get kids behind the Supreme S238 wake surfing for the first time. Competitors and event sponsors donated their team and products to spread the joy of wake surfing to these first-timers. #PassTheHandle is a Watersports Industry Association community outreach program, held in conjunction with Discover Boating Day. #PasstheHandle Day is July 23, 2017. Visit WSIA.net to get involved.

The fun of the SWSC event was chronicled by a live video feed provided by WakeSurf365.com and the event spectators got their chance to partake in the water sport with great slip-n-slide. The camaraderie didn’t end at the lake. A dinner was hosted for participants and their families complete with a corn hole tournament and after-dinner karaoke.

About Supreme Boats: There is a growing movement of people embracing the Supreme life with the only affordable premium towboat on the market. With performance, style, simplicity and strength built to maximize fun on the water, Supreme Boats are the fastest growing surf and wake boat brand with industry-leading market share growth. Spend more time on the water doing what you love. It’s more fun to have fun. http://supremetowboats.com http://supremewakesurfingchampionship.com

About the INT League: The INT League is a marketing and promotional company that hosts amateur waterski, wakeboard, kneeboard, wake skate and wake surf competitions nationwide. INT aspires to grow participation and consistency in towed water sports by actively promoting, organizing, and supporting, fun competitive events by welcoming all ages and ability levels. For more information please see the INT website at www.intleague.com.