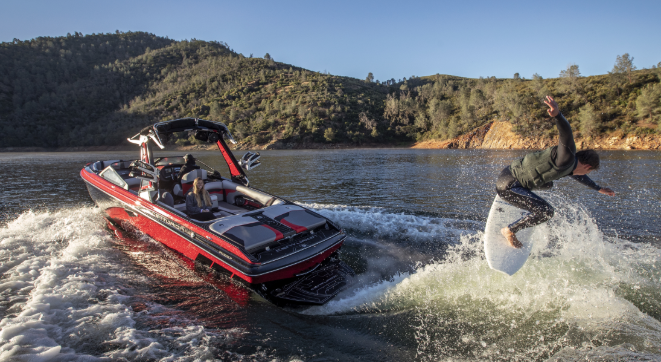 MERCED, CA (August 23, 2019) –As the retail registered unit and market share leader in the 26-foot segment, the Centurion Ri257 continues to blow minds with the World’s best surf waves. This retail growth is thanks to a long wave with tons of push and a full spectrum of sweet spots from curl to face. This surfing phenomena is created by the Opti-V Hull, 5550 pounds of ballast, 7 specifically placed ballast locations and 90-second filling RAMFILL ballast. The Ri257 has all the advantages of a big boat in waves, wakes and ride with uniquely better handling and 50% more fuel efficiency. Numbers like these have earned the Ri257 the title of Official Pro and Outlaw towboat for the World Wake Surfing Championship, presented by GM Marine, going off in Ogden Valley, Utah at the Pineview Reservoir, September 5-7, 2019. This year’s Centurion WWSC stands to pile on to the 101 World Championship personal bests behind the Ri257. Ask your local Centurion Boats dealer or hit the link here to learn how you can secure a spot for the Water Prove It VIP Experience at WWSC 2019 and take advantage of the largest buying incentive of the 2020 model year.

The Centurion Ri257 has done nothing but blow minds since its introduction in model year 2017. The perfect ride in and behind the Ri257 has been proven all over World. But domestically is where this World Championship towboat has completely proven the World’s best waves wake and ride with more than 100% increase in market share from 2017 to 2019 and 178% increase in units sold 12 months rolling. The Centurion Ri257 is clear leader in the 26-foot inboard size segment because this brand and these boats continue to win the hearts and minds of wake surfers everywhere by proving it on the water.

“As the undisputed ‘World’s Best’ wake surfing boat, the Ri257 doesn’t need any improvements, but our engineering team can’t leave well enough alone,” stated Paul Singer, President of Centurion & Supreme Boats. “Product development was dedicated to the driver experience for 2020 with the introduction new Cobra Driver’s Seat with 160-degree swivel and available 6-way adjustable power.” Singer continued, “But my favorite 2020 add is the new rear-view surf camera. I didn’t think the 257 could get any better, but it’s true. The best just got even better!”

The refined look of the Ri257 continues to turn heads for the 2020 model year with the addition of some amazing new gel coat colors that allow you to design a one-of-a-kind Centurion. Exciting new colors like Pretty Penny Copper, Military Green, Laidback Lavender, Princess Pink and Steel Blue Metal Flakes make the Ri257 even more customizable. The All Hex vinyl option adds another level of customization to this already uniquely built boat. Bring more color and texture into the interior of your 2020 Ri257 to match your personality. Centurion boats is a custom boat manufacturer and there is no boat that is a better example of that fact than the 2020 Centurion Ri257.

The 2020 Centurion Ri257 towers above the rest with the optional DropZone Auto Tower by Roswell with available BombShell Strapless Racks and XXL Bimini. This tower folds quick and smooth with the push of a button thanks to floating Linear Actuators. The DropZone offers even more function with thoughtful touches like surf-side tow points and hangers. It also provides 40% more strength thanks to the water drop extruded construction that compliments the lines of Centurion boats perfectly. It looks as though the DropZone with BombShell Strapless Racks were designed exclusively for the Centurion Ri257 because they were.

In sports, the sweet spot is everything. Other boats have one sweet spot – a position, typically off the back of the swimstep, where there is a constant push. The Centurion Ri257 offers a spectrum of surf able power from the curl all way up to the face of the wave. This helps beginners learn to throw the rope, as well as seasoned pros master their next World Championship-winning move. This is why the Centurion World Wake Surfing Championship is at 101 personal bests during the competition and counting. The Centurion Ri257 surf sweet spot is as much as 26 feet – more of a sweet surf spectrum than a single spot. This “World’s Best” wave is the result of purpose-filled numbers and we’ve got yours.

Centurion’s Opti-V hull design displaces more water, to form the world’s best waves quickly on either side and creates side-to-side balance for perfectly symmetrical wakeboard wakes. With 20 degrees of deadrise at the transom, as much as double the degree of V as any other towboat, Centurion’s Opti-V Hull eliminates the shock of rough water for an amazingly smooth ride. Centurion has the World’s best waves, wake and ride. Centurion’s Opti-V hull is so efficient, even with 20-degrees of deadrise, it cuts through the water with minimal resistance. This is thanks to strakes, chines, rear hull pads and wave enhancement systems that create lift rather than drag. The results? Up to 50 percent more fuel efficiency than comparable boats of other brands.

Adding to the performance and efficiency of the 2020 Ri257 is Centurion’s exclusive RAMFILL ballast. This system is comprised of two sub-floor tooled-in tanks extending from the driver’s seat back to the transom of the boat. These tanks fill with as much as 2650 pounds of water in as little as 90 seconds. That’s a minute and a half to deliver exactly the wakes you want, whether beginner or seasoned pro. Over a ton of weight in less than two minutes and wakes can be adjusted mid-session. Just as important as the speed at a which these tanks fill and their weight is their location. They are evenly distributed through the center of the boat helping to eliminate a nose-high running angle and adding to the efficiency of the Opti-V running surface.

Centurion offers the industry’s largest and best-placed ballast capacities. In the 2020 Ri257 you can get up to 5550 pounds of displacement. That means you have the flexibility to dial in the waves and wakes you want. It’s a simple formula: more specifically placed ballast = better waves and wakes. With as many as seven precisely placed ballast locations independently controlled at the dash, Centurion boats create pro-level waves and wakes that can be fine-tuned for any riding style. The proportional front-to-back ballast locations also allow the driver to level the running attitude of the boat for increased visibility and improved handling.

All of these performance claims will be proven once again behind the 2020 Centurion Ri257 at the World Wake Surfing Championship presented by GM Marine in Ogden Valley, Utah at the Pineview Reservoir, September 5-7, 2019. Ask your local Centurion Boats dealer or hit the link here to learn how you can secure a spot for the Water Prove It VIP Experience at WWSC 2019 and take advantage of the largest buying incentive of the 2020 model year.

About the Water Proof Tour: The Water Proof Tour, presented by Roswell Marine, is Centurion and Supreme’s eight stop series sanctioned by the Competitive Wake Surfing Association (CWSA) as a part of the World Series of Wake Surfing. The series has now taken the world’s best wakes, waves, and ride all over the country and all over the world with stops in Arizona, Washington, Texas, Utah, Japan, South Korea, and Canada. Don’t miss out on some of the best wake surf riders in the world and don’t miss your chance to get out on the water, we’ve got your number. Centurion boats gives you the perfect ride, every time. To learn more about the Water Proof Tour, visit www.waterprooftour.com.