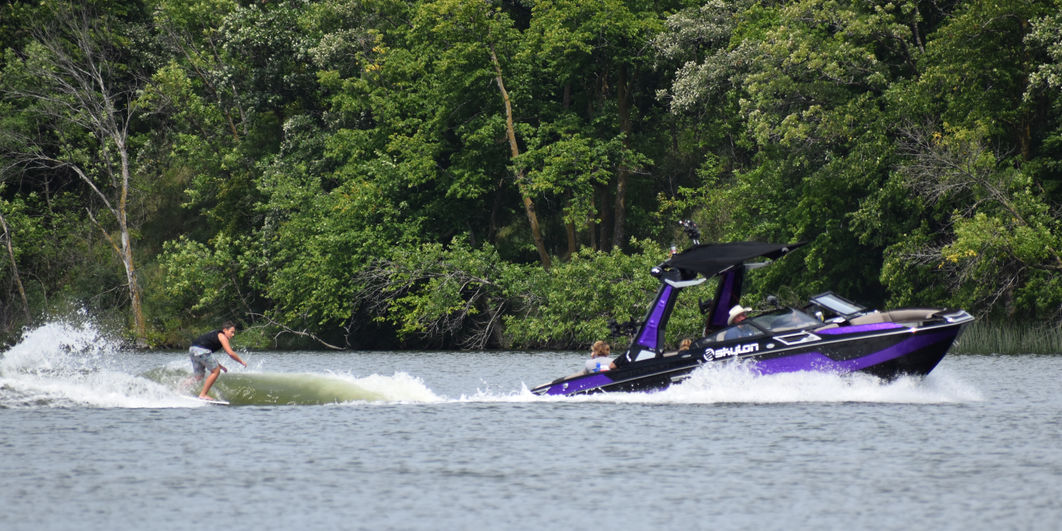 Alexandria, MN (August 17th, 2020) – Last weekend this year’s Surf MN King of the Lakes Classic, presented by Faction Marine went off with great success despite some obstacles presented by extreme weather. The event which was scheduled to start Friday 8/14 was delayed one day due to thunderstorms and a tornado which affected the area throughout the day. The event site was in serious disarray Friday as the heavy winds and intense rain blew away tents and flooded the shore, but the Faction Marine and Centurion team admirably pulled together Saturday morning to get set for what would soon be an event for the ages.

Saturday saw competitors compete for seeding in Sunday’s final runs. The competition site was a buzz with talk of the all new Centurion Ri245. The boat which was unveiled 8/10, less than a week before the event, threw a serious wave which saw many competitors landing tricks they’d never before completed in competition. Conner Burns, Keenan Flegel, Caitlin Wheeler, Tyler Stewart, Sammy Goncalves, Zoey Montgomery, Evan Hudson, and Reed Cole-Tucker all finished first in their semifinal runs in various division, needless to say the Centurion Team was well positioned heading into Sunday’s finals.

Sunday saw some very exciting action with close finishes in multiple divisions. In the Pro Men’s Surf division Conner Burns edged out fellow Centurion Boats pro-teammate Keenan Flegel with a close score in both final runs. However, Keenan would still be crowned as a fellow King of the Lakes with his strong showing in the Pro Men’s Skim division where he secured first place over Centurion dealer River Valley Power and Sports team rider Tyler Stewart and fellow Centurion pro-teammate Nick Parros.

Several other Team Centurion riders had strong showings over the weekend as Zoey Montgomery and Reed Cole-Tucker finished first in their divisions (Outlaw Female Combined and Amateur Male Skim) while Caitlin Wheeler and Evan Hudson made the podium stage in their respective divisions (Pro Female Skim and Outlaw Male Skim).

Zachary Kuykendall, Marketing Manager at Centurion Boats, attended the event and had this to say, “This year’s Surf MN King of the Lakes Classic will be one that attendees remember for a long time. Despite some unpredictable obstacles our teams pulled together for what was an incredibly successful event. I have to thank Nicole Hudson, Jason Lybeck, Shaun Kolar, Robby Maschhaupt, Ken Scribner, Sean Cummings, and every member of the Centurion Team who helped make this event possible. We’re so happy to support Faction Marine in hosting this contest and look forward to events like this in the future.”

As one of the summer’s only live events this event essentially served as a 2020 World Wake Surfing Championship preview. Get ready for Worlds coming this fall October 1st to October 3rd in Fort Worth, Texas. Read more about Worlds here and visit the CWSA website for information on qualification and registration.

King of the Lakes Classic Podium Placements by Division: