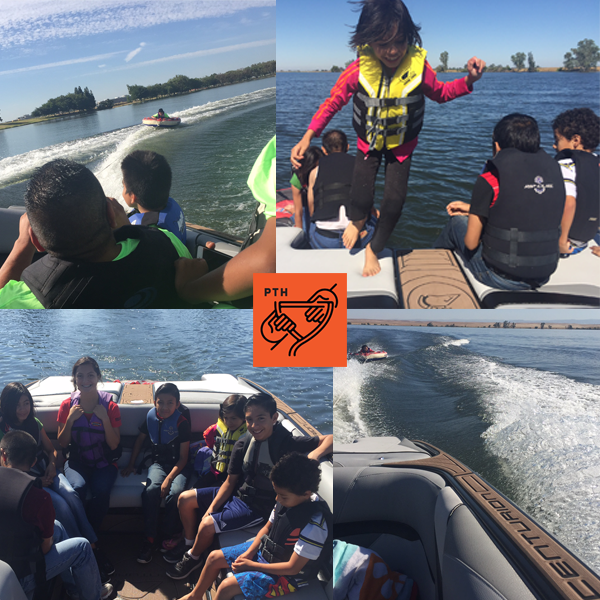 MERCED, CA (July 25, 2016) – Pass the Handle came a week early this year at Centurion and Supreme Boats. These Correct Craft Companies combined Pass the Handle day with a Weekend of Giving on July 16, 2016. In addition to a canned food drive and Lake Yosemite clean-up, Centurion and Supreme chose to give the fun of towed water sports to some extremely deserving individuals. Employees Manual Ayala and Jose Gonzalez Mora as well as their children were surprised with first-time rides in and behind the boats these two dads have been building for many years.

“The culture at Centurion and Supreme is defined by service; service to God, the community and our employees,” said Paul Singer, President of Centurion and Supreme Boats. “The Weekend of Giving is a perfect example of the influence of Correct Craft on our brands and our new direction as a company.”

Originally Centurion and Supreme Boats had planned to Pass the Handle to a local less fortunate family on the Weekend of Giving. While recruiting for Lake Yosemite trash clean-up help, they realized there were some deserving families much closer to home. At the company picnic Ayala mentioned that he had never been in a Centurion or a Supreme boat on the water. After building these boats for more than 22 years, the leadership team felt it was time they Pass the Handle internally to employees like Manual.

When asked how this year’s Pass the Handle came about, Amy Mauzy, Vice President of Marketing and Sales, responded this way. “We brought a 2017 Centurion and Supreme boat to the picnic for the employees’ families to check out. It was really cool to see dads and moms pointing out the areas of the boats they build to their kids. Their pride was inspiring.” Mauzy continued, “After seeing this and hearing Manual’s story, we gathered our leadership team and unanimously decided to surprise two employees by taking them and their families out in the boat. We chose Manual and Jose to be the first, but they won’t be the last.”

Ayala was asked what he thought about the day. “I am loving this!” Ayala said happily. He explained, “It feels good to ride in a boat that I made.”

When asked why Correct Craft Companies are so giving, Shane Stillman, Vice President of Production & Engineering for Centurion and Supreme Boats, said this. “The positives effects from the weekend of giving and pass the handle with Jose and Manual can be seen on the production line and in the boats.” Stillman explained, “Giving these guys the opportunity to give back to their community as well as enjoy the boats they are building, strengthens our team and makes life better for all concerned.”

Jose Gonzalez Mora has been with Centurion Supreme boats since 2003. He was born and raised in Merced, CA. Jose is married with 7 Children. He is very devoted to his church, Sacred Heart. He likes playing soccer and razing his children. He is enrolled in Knights of Columbus and has been an active member for 3 years. He is proud to be a part of this growing company and

“There are no words to describe how grateful and blessed I feel to be able to go out on the lake with five of my seven children.” Gonzalez Mora continued, “I thought I was bringing my kids to clean-up the lake, instead I am experiencing something new and fun with my family.”