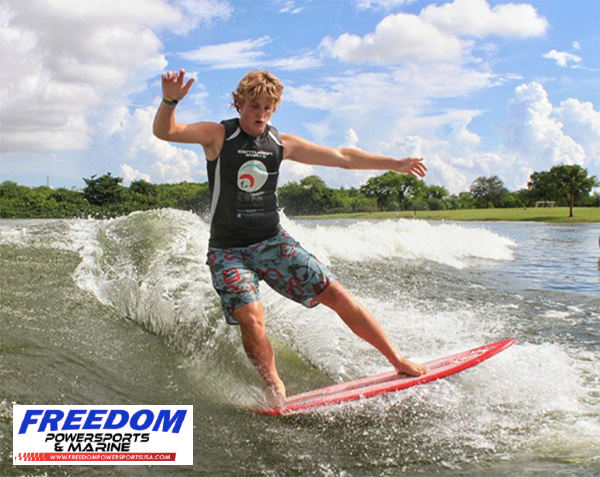 MERCED, CA (February 1, 2018) – Freedom Marine of Lewisville, TX and Centurion Boats are honored to have the Scribner Family sign-on to promote the Worlds Best Waves of Centurion boats in Texas. Professional Wake Surfer Jarrett Scribner, was sold on the official towboat of the Centurion World Wake Surfing Championship after his Pro Class World Championship runs behind the Ri257 in Kelowna, BC, Canada last year. That performance added to the service-centric reputation of Dallas Area Centurion Dealer Freedom Marine prompted the Scribners chose to be on this team. Since the Correct Craft purchase in 2015, many changes within the brand and product line are now being noticed by wake surfing enthusiasts and professional competitors alike. Centurion and Freedom wanted to partner with Scribner because of his high-level riding, but this partnership is also due to his character and the way he represents his family on and off the water. Jarrett and the entire Scribner family will promote their Centurion Ri257 as well as the entire Centurion brand locally. They will also introduce the Dallas boating community to the incredible team at Freedom Marine. Jason Taylor and James Wilson of Freedom have proven to be excellent partners to Centurion boats and the Dallas water sports community.

“We are excited to be a part of Jarrett’s next chapter and watch him grow in the sport of wakesurfing and as an individual,” expressed James Wilson, Freedom Marine Sales Manager.

“Jarrett is the great example of performance and poise. We are extremely excited an athlete of Jarrett’s caliber as well as his family has chosen to represent Centurion and Freedom Marine.” Commented Amy Mauzy, VP of Sales and Marketing for Centurion & Supreme Boats.

Please join Freedom Marine and Centurion Boats at the Dallas Boat Show to meet and congratulate Jarrett. He will be in the Freedom Marine booth #216 each weekend at various times both Saturday and Sunday.

About Centurion Boats: Innovation has always been the hallmark of Centurion boats. Now, thanks to new product, leadership and Correct Craft company culture, innovation is running deeper than ever, into a re-imagination of the Centurion brand. Water sports enthusiasts are embracing Centurion boats for the world’s best waves, wakes and ride, as well as ambitious design and inspired craftsmanship. Time to re-imagine your ride, in a Centurion. http://centurionboats.com