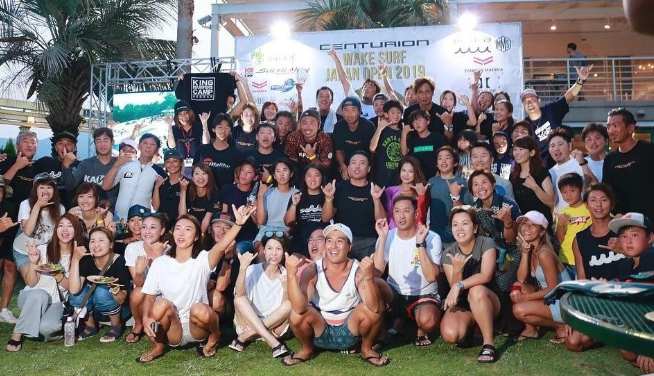 Around the Globe (July 28, 2019) – This July Centurion Boats zipped back and forth all over the world with Water Proof Tour stops in Washington, Japan, and Canada along with another international competition in Russia. You can read about the North West Wake Surf Open in Seattle and Wrangle the Wave in Alberta on our blog, these events composed the Washington and Canada stops of the Water Proof Tour. Below you can check out what happened in Moscow and Ōtsu during the Russia and Japan events. The world’s best wave is proving it all over the globe.

MOSCOW, RUSSIA – On July 12th and 13th the Ingrad Moscow Wakesurf Cup was held at Serebryany Bor Park on the waters of the Moscow River. The gold level CWSA sanctioned event featured riders from Russia, Ukraine, Poland, Belarus, and the United States. The 2019 Centurion Fi21 towed the event throwing a phenomenal wave for surfers to launch off all afternoon. The Fi21 is one of the mightiest surf boats on the planet thanks to the Opti-V hull. This hull can contain up to 4750 lbs. of ballast helping to make the ultimate surf wake. The 21 ft. boat is also surprisingly smooth on rough water, not only does the Fi21 have a striking look, it performs.

The two-day event featured plenty of action with exciting riders from all across the United States and Europe treating the audience to world class wakesurfing. It was exciting to see such enthusiasm for water sports from the local audience. When the competition wrapped Centurion riders dominated the podium with Sean Cummings placing first in the Pro Men’s Combined division and Russian Centurion riders Stepan Kulagin and Georgy Markaryan taking first in Outlaw Men’s Skim and second in Outlaw Men’s Surf respectively.

There was plenty of entertainment for attendees to partake in with live djs and musical acts throughout the day, a mini flea market with exciting products, a skimboard pool, a volleyball tournament, table soccer, jet ski shows, flyboard shows, cheerleading performances, a fantastic opening and closing ceremony, and of course, a live stream of the event broadcast on site as well as the web, needless to say the large crowd was not lacking for excitement. To see compete placements and points please visit the CWSA website. Centurion Boats was thrilled to see the success of the event as the world’s best waves, wakes, and ride continues to prove it all over the globe. You can check out some footage of the action on Ingrad’s YouTube page.

ŌTSU, JAPAN  – This Sunday, the first Japan stop on the Water Proof Tour was held at Rotary Pier 88 in Ōtsu on the scenic shores of Lake Biwa. The Centurion Wake Surf Japan Open featured exciting action throughout the day as the CWSA sanctioned silver level event gave local talent the opportunity to compete in style behind the 2019 Centurion Ri237. With the best wave on the market and an inside voice quiet interior it’s no wonder that the Ri237 is the official towboat for both the World Wake Surfing Championship and the IWWF World Wakeboard Championship.

Ashley Kidd was on the scene as an ambassador for Centurion using her valuable water sports knowledge as a competition judge and through teaching lessons to attendees as she helped to pass the handle to an excited new audience. The competition featured over ninety surfers from across the world who threw water all over the lake in a fun day for all who attended. For full results please visit the CWSA website.

The event capped off with a huge barbecue after party where surfers and attendees shared an evening of celebration. The party helped close the successful event with smiles all around. The Centurion Wake Surf Japan Open could not have been such a success without contributions from all the staff members and volunteers who helped make the competition a day to remember. Centurion Boats loved to see so many smiling faces during the event and hopes to continue being involved in events like this in the future.

About the Water Proof Tour: The Water Proof Tour, presented by Roswell Marine, is Centurion and Supreme’s eight stop series sanctioned by the Competitive Wake Surfing Association (CWSA) as a part of the World Series of Wake Surfing. The series has now taken the world’s best wakes, waves, and ride all over the country and all over the world with stops in Arizona, Washington, Japan, South Korea, and Canada. Don’t miss out on some of the best wake surf riders in the world and don’t miss your chance to get out on the water, we’ve got your number. Centurion boats gives you the perfect ride, every time.