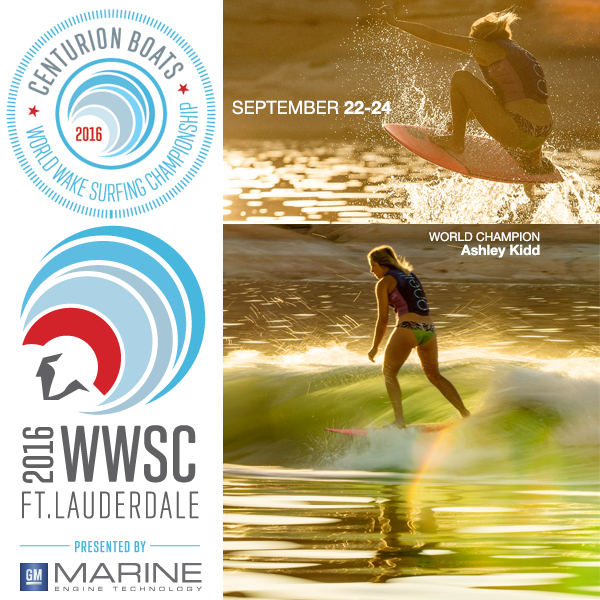 MERCED, CA (August 5, 2016) – The Centurion World Wake Surfing Championship presented by GM Marine is back for 2016 as the pinnacle wake surf event of the season. The 2016 WWSC will be held September 22nd through the 24th at Mills Pond Park in Fort Lauderdale, FL. The evening of September 21st will be rider registration check in, this will be held at the B Ocean host hotel. Right now current, past and potential champions from all over are traveling to World Series of Wake Surfing events to earn a CWSA (Competitive Wake Surf Association) ranking that qualifies them for wake surfing’s equivalent to the Olympic Games, the Centurion World Wake Surfing Championship. The Official Wake Surfing for this World Class event is the towboat with the biggest waves and the biggest industry buzz. The 2017 Centurion Ri237 powered with GM Marine Engine Technology by PCM will be pulling the next set of World Champions to their personal bests in South Florida this September. Book your travel to witness Centurion Boats Reimagined at the 2016 Centurion World Wake Surfing Championship presented by GM Marine. Contact your local dealer today to reimagine performance, design and craftsmanship with the Official WWSC Towboat, the 2017 Centurion Ri237.

In its 21st year, the Centurion World Wake Surfing Championship is a legendary competition among all water sports events, let alone wake surf tournaments. Each year Centurion continues to improve on the wave-making capabilities of their boats to push the World Champion performance. This is why Centurion and specifically the WWSC is the destination of the best surfers in the World. Personal bests run rampant behind these boats especially at this event. Make your plans to be there or tune in to the live web cast September 22-24, 2016.

Past host to the WWA Wakeboard World Championships, Mills Pond Park is an amazing place to watch or compete in a surf event. The depth of the pond will allow the Centurion Ri237 to kick-up the biggest most well-defined waves possible, while the close grassy shoreline will allow for a great view of the World Wake Surfing Championship action. Centrally located in Fort Lauderdale, Mills Pond Park also offers the amazing early Fall weather of Southern Florida and plenty of fun off-venue activities. Although other than the competition venue, competitors and spectators may not get much farther than the event’s official hotel. The event’s official hotel is the B Ocean Resort of Fort Lauderdale. This Florida beach resort is the perfect place to relax and even rev-up for the next day’s wake surfing. Hotel Reservations 1-866-990-6826 booking link: 2016 World Wake Surfing Championship

As the nearly 24-foot Official WWSC Towboat the 2017 Ri237 is the next level in World Championship Towboat performance, design and craftsmanship. The Ri237 helps you reimagine performance with a Deep-v Hull pushed by GM Marine Engine Technology from PCM. World Championship performance continues with the seamless integration of Centurion’s signature wake enhancement technology and industry-leading 5100 pounds of available factory ballast. RAMFILL Ballast fills in 45 seconds to create huge walls of water, while QuickSurf Pro can move your surf wave from side to side in as little as 2 seconds behind a level boat. The Centurion Articulating Tracking System (CATS) and the Stinger Wake Plate fine-tune the shape of your wakes and waves with a touch. The Ri237’s form follows its function with an ambitiously designed exterior featuring a one-of-kind modified v-bow, uniquely shaped body lines and a stylized transom that is as handsome as it is hangout-ready. Luxury interior accommodation like a 3-position Slide Seat with available lean backs and patented Side by Side High Definition (SxS HD) Touch Vision technology make days on the water in this Centurion last even longer. Inspirational is the only way to describe the level of craftsmanship applied to the Ri237. From the strength, consistency and environmental responsibility of the Vacuum Infusion Process (VIP) to the artistically applied gel coat to the quiet unibody construction it is all built on, the Centurion Ri237 is a new generation of World Championship Towboat.

Contact your local dealer today to reimagine performance, design and craftsmanship with the Official WWSC Towboat, the 2017 Centurion Ri237.