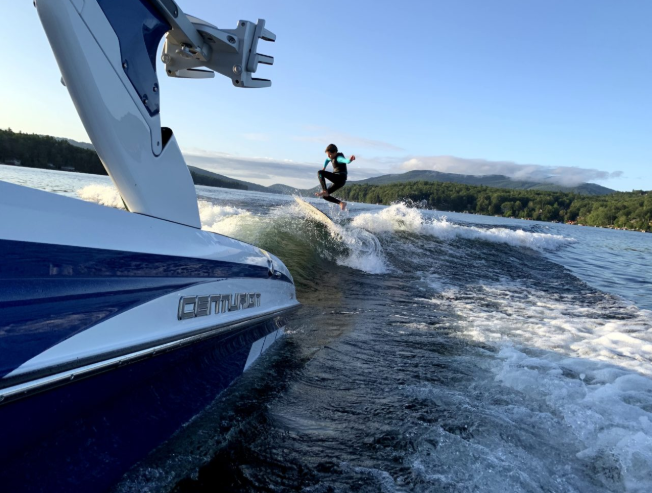 Eleven-year-old Reed Cole-Tucker comes from a family with deep history of boating. His father Hale grew up on the lake where he was engaged in a variety of watersports activities and couldn’t wait to pass the love of boating and lake life on to his kids. Despite this lifelong love, Hale and his family didn’t discover wakesurfing until 2016 when one surf session turned them from first time riders to enthusiastic surfers. As a family the Cole-Tucker’s were overjoyed to find an activity behind the boat that everyone could enjoy together. After that initial session the family was hooked, they’ve enjoyed hundreds of hours on the water as a family surfing with mom’s skills turning quite a few heads, turns out she’s one serious shredder!

However, mom isn’t the only shredder in the family. When Reed began surfing is was clear that he had found an activity that was right for him. Reed just couldn’t get enough, after hours of surfing each day his family would have to literally pull him out of the water when it was time to head home. 2018 was somewhat of a breakthrough year for Reed as he began learning tricks, riding in competition, and learning more skills through surf lessons. In 2019 that hard work has begun to pay off, this season Reed has won five separate Competitive Wake Surfing Association (CWSA) sanctioned competitions all over the country and looks to further that success at the 2019 World Wake Surfing Championship (WWSC), presented by GM Marine, in Ogden Valley Utah 9/5 to 9/7. Qualifying for Worlds is no small feat, especially for a surfer so new to competition.

When it came to finding the right surf boat the Cole-Tucker’s had tried everything. In the past they’d owned several boats and rode behind countless others including brands like; Malibu, Axis, MB, Master Craft, Moomba, Supra, and the like. They thought that every wave had its positives and shortcomings, some waves were too steep, some to lippy with rough transitions, and some had no push, but there wasn’t a wave that knocked their socks off all the way around.

It was under the sweltering Texas sun that Reed experienced his first Centurion Smile. During the Waco stop of the 2019 Centurion Water Proof Tour, presented by Roswell, Reed had his first opportunity to ride behind a Centurion. Even before his first pull Reed took one look at the wave and knew it was going to be a great run. Reed not only had a great run but ripped up and down the wave that day, taking first in the Juniors division when all was said and done. After he came off the water Reed was ecstatic, he said that it was hands down the best wave that he had ever rode.

Reed’s endorsement was enough to make his father Hale curious, so curious that he signed up for a VIP Demo Experience with the Centurion team on site at the event. The local dealer Ski Dock took Hale out to experience the wave for himself and once he surfed it he was a true believer. Hale said, “It’s like Centurion took the best parts of every other boat’s wave and combined them into the ultimate wave. Tons of push with the ability to ride way back on the wave, even for bigger guys like myself! It also gives a soft transition into flats which is great for skim style surfers like Reed. Most importantly the wave has the most beautiful, huge, clean face of water to shred on!”

The wave had proved it to the Cole Tucker family, after searching and searching for a wave to rise above the competition the Ri237 had finally delivered the performance the Cole-Tuckers desired. They have since worked closely with their local Centurion representative and their local dealer, Silver Sands Marina, to get a new Ri237 for Reed to train on and for the whole family to enjoy, their first Centurion. Hale mentioned that the family is stoked to represent Centurion for years to come as they watch Reed continue to pursue his dreams and progress behind the best wave in the industry. At the end of the day it’s about the family for the Cole-Tuckers. Everyone goes out to watch Reed practice and ride, Reed will even throw in a few coaching tips to the rest of the family now that he’s become a championship level surfer. Perfect ride, every time.