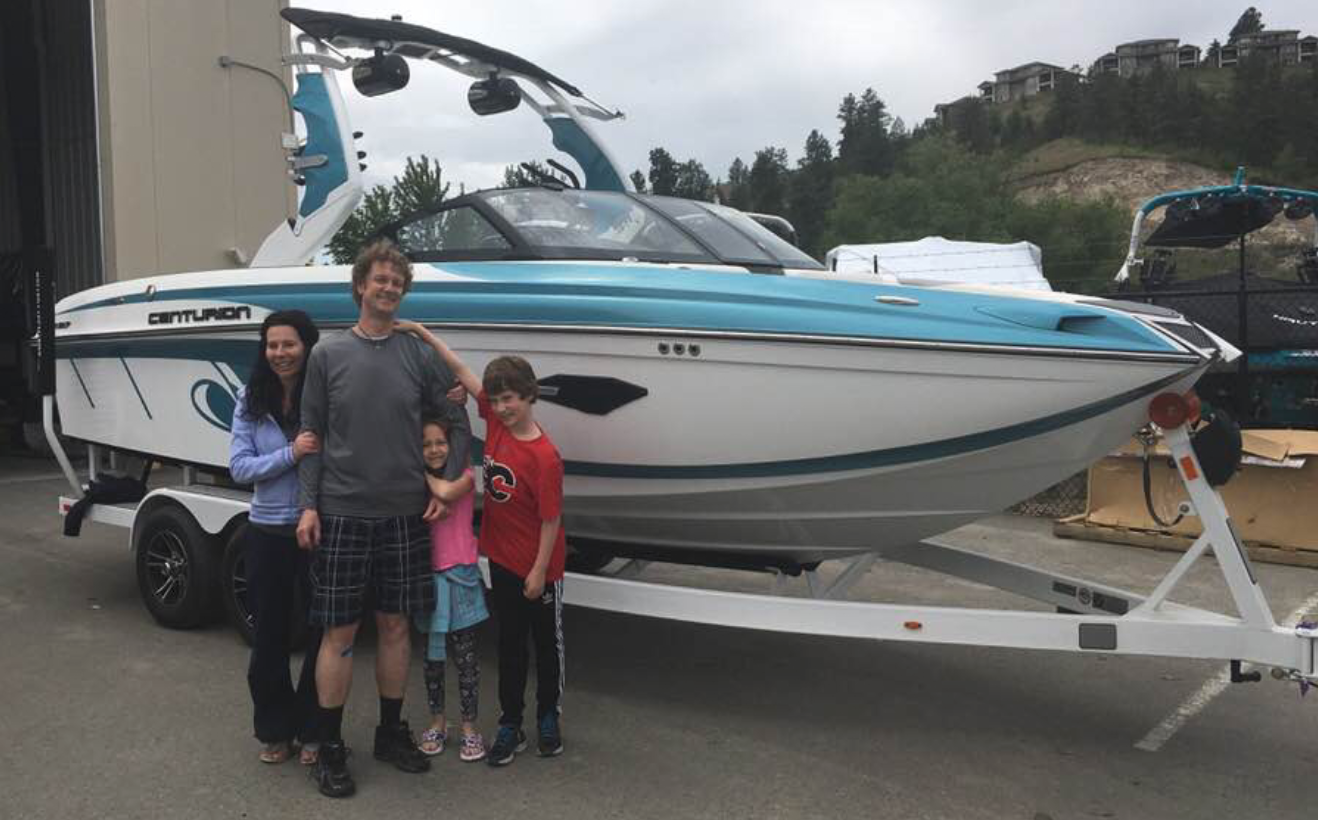 The summer of 2013 was the first time that Nicole spent time in the Kelowna area, at the moment she was longing to experience something she’d never attempted, wake-surfing. After trying ocean surfing while working in Brazil Nicole fell in love with the idea of cruising along the water on a surfboard behind the back of a boat. However, as Nicole came to find, wake-surfing can be a difficult sport to get started with if you do not own your own boat or have a close friend who’s willing to loan out theirs. Nicole didn’t consider herself or her family to be “boat people”, in fact, from wakeboarding to tubing she’d never tried any “pull behind the boat” sports. Thus, with limited knowledge, Nicole grabbed her proverbial board off the rack and began her search for an opportunity to jump on a wave behind the back of a boat.

Her journey began at a place Nicole referred to as a “so-called surf school” where she signed up for what she thought was a wake-surf lesson. As her lesson began, she found it odd when her feet strapped firmly into the board below her, she didn’t know that wake-surf boards were so restrictive! Nevertheless, she grabbed the rope and jumped out on the water. As her lesson continued Nicole was quite confused, after about four pulls she asked the instructor, “When should I let go of the rope?” A question that was met with a big laugh as the instructor explained that she was, in fact, on a wakeboard not a wake-surfboard. Despite her mild annoyance Nicole soldiered on, taking advantage of the experience she asked the driver to speed up on the next run. This decision ultimately ended poorly, resulting in Nicole’s first concussion and her wakeboarding retirement.

After a topsy-turvy wake-boarding lesson Nicole was still dying to try wake-surfing, so after a little more research she found Surf Kelowna and phoned up the owner Bob Vaughan. Bob told Nicole about his Sunday morning group; an all gals team called ‘The Mermaids’. Nicole was excited to hear about the group but was nervous that she’d be the least experienced surfer, she figured ‘The Mermaids’ would all be amazing. They did turn out to be amazing surfers, but Nicole felt comfortable as ‘The Mermaids’ were also some of the most patient and inspiring folks on the water. Plus, Bob and his son Lewis drove and coached in a way that made it very easy for Nicole to get up on a wave. Bob, Lewis, and ‘The Mermaids’ coached Nicole through every step until she miraculously let go of the rope.

From that moment she was hooked, Nicole has been surfing with Surf Kelowna ever since calling here time on the water, “Always the highlight of my summer”. This year Nicole was ready to share her newfound love with the entire family. Her kids were getting older and she thought it might be the perfect time to become a ‘boat family’. However, just like her search for the right wake-surf lesson, Nicole wasn’t sure where to start, “It’s such a big purchase for a family who is starting from ground zero on boat knowledge,”

One day Nicole was looking at new surfboards and went out on the water with Bob to test one out. Bob took her out on a new Centurion model. After the ride Bob asked, “Are you going to buy the board?” Nicole responded with a big ‘Centurion Smile’ stretching across her face, “No! I just want to buy the boat!” Nicole wasn’t prepared for the gigantic powerful wave in which she’d just experience, the wave was longer than any wave she’d surfed before and gave a beautiful push right at the end. Nicole noted, “It’s almost hard to fall out of the sweet spot because it never ends,”.

Nicole had found her boat. Her family ordered their new Centurion Ri217 from Wizard Lake Marine in January and have been enjoying their time on the lake all summer long.