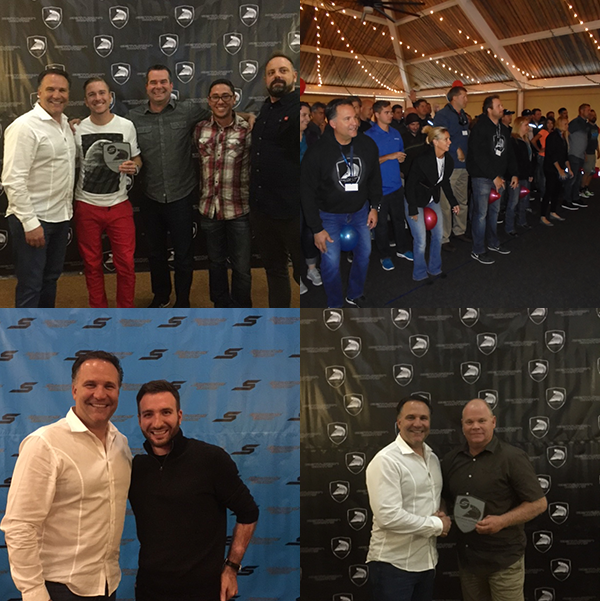 MERCED, CA (November 14, 2016) – Centurion & Supreme Boats held their annual Dealer Meeting and Sales School November 6-9. Dealers were invited to the spectacular Tenaya Lodge near Yosemite National Park to learn about the exceptional 2017 Centurion and Supreme boats and participate in sales training. Dealers collaborated on best practices while having fun with vendors and the Centurion and Supreme staff. Matt Manzari, former pro wakeskater, was the featured speaker of the 2016 Centurion & Supreme Dealer Awards Dinner presented by Extreme Customer Trailers. Manzari shared his wakeskating experience, faith, and inspired the group. The meeting was punctuated with the presentation of awards to outstanding salespeople and dealerships.

“I couldn’t be more proud of the work that was accomplished at the 2016 Centurion & Supreme Dealer Meeting,” acknowledged Paul Singer President of Centurion & Supreme Boats. “But my favorite part of the meeting was just being together. This meeting gave me the opportunity to get to know our dealers in a fun, productive environment and for that reason I am so unbelievably energized about the future of these brands.”

Centurion & Supreme employees hosted classes, educating dealers about each brand and boat model, marketing initiatives, and analyzing the competition. Salespeople and vendors were treated to a tour of the Centurion & Supreme Boats Factory in Merced, Calif., where they saw boat building firsthand. They were able to meet factory employees and learn about the superior construction processes from Centurion and Supreme experts. The meeting was not all business, however, and many took the opportunity to enjoy the beautiful outdoors by hiking near the lodge, and visiting nearby Yosemite National Park and Bass Lake.

Dealers, vendors, and the Centurion & Supreme staff strengthened business relationships and developed comradery during the event. Attendees participated in a Team Challenge, where they were challenged to complete silly games in less than one minute. Centurion and Supreme also hosted a Fireside Hangout, allowing salespeople to mingle with one another while enjoying s’mores and a campfire.

The last night of the meeting, Paul Singer, President of Centurion & Supreme Boats introduced guest speaker and former pro wakeskater Matt Manzari who spoke about faith and perseverance relating to his miraculous comeback from serious injuries. Amy Mauzy, VP of Marketing and Sales for Centurion & Supreme Boats, hosted the Dealer Awards, recognizing the remarkable sales, customer service, and business achievements of salespeople and dealerships of the past year. The award recipients are listed below.

About Supreme Boats: World-class towboats that reign Supreme. Supreme boats are World Class performance, style, simplicity and strength built to help water sports fanatics reign supreme on the water at an extreme value. To learn how you can wake, surf and reign Supreme visit www.supremetowboats.com.