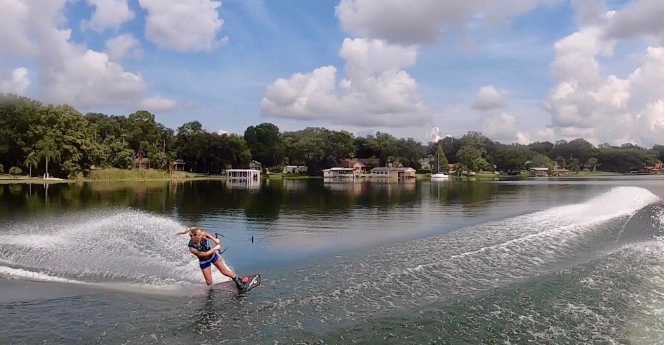 MERCED, CA (October 2, 2019) —The Centurion Boats pro wakeboard team is pleased to announce the addition of world-renowned wakeboarder Dallas Friday. Dallas has found success at every level of the sport and brings with her a set of principles that fall very in line with Centurion’s own value set. Centurion Boats has always supported a pro team that not only ranks high in performance but also ranks high in character. These team traits are important to the ultimate charge of Centurion Boats to make lives better. Partnering with athletes like Friday that also value this charge has been a key factor to Centurion’s expanding positive reputation over the past several years.

Dallas Friday began wakeboarding in the year 2000. In her rookie season she won the Americas Cup title and a silver medal at the X Games, despite being the youngest competitor at the event. In the nearly two decades since she’s become one of the most decorated wakeboarders of all time and a household name in the water sports world.

Friday said she was drawn to the Centurion Team for a few reasons the world class quality of the boats were a given, but beyond that she loved the people behind the brand noting that the authenticity in how the organization treats people is undeniable. Friday herself is a strong Christian, and Centurion’s charge to ‘make lives better’ resonated with Friday’s goals in her own life. She looks forward to centering herself on her faith over the next season as she aims to stay healthy for the opportunity to compete in some of next season’s major events. Additionally, Friday has two young children, aged two and three. This season Friday aims to teach them how to wakeboard on their own, in fact, they had their first pull behind a boat in a brief tubing session just last weekend!

When asked about joining the Centurion Team Dallas Friday said, “100% Gods hands are very much at work in my life. I feel so blessed and privileged to have the opportunity to partner up with Centurion Boats and I’m looking forward to a great year ahead. I know it’s only the beginning of something very special and the BEST is yet to come!”

Paul Singer had this to say, “We could not be more excited to add Dallas Friday to our pro team. Obviously, she’s an incredible talent, but more than that she’s an incredible person. Dallas’s strong value set make her a perfect addition to the Centurion Boats family, we know that this new partnership will help continue to build on Centurion’s reputation throughout the following season and into the future,”