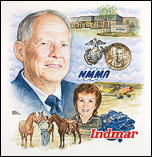 “It is with a heavy heart that I announce the passing of my father,” said Chuck Rowe, former President of Indmar Marine Engines. “My father was a courageous leader, who defined the very essence of corporate and civic responsibility.”  Rowe further explained, “His passion and commitment to boating benefited not only Indmar Marine Engines but the entire marine industry.”

Born on May 4, 1927, like most young men of a time when war dominated the 1940’s, Dick wanted to serve his country and enlisted in the U.S. Marine Corps.  Toward the end of his twenty years with the Marines, Dick became a partner in a Memphis-based boat dealership.  Upon retirement from the Marines in 1971, he and his wife Donna started a small marine and industrial distributorship called Indmar Products Company, Inc.  The business was founded on $30,000, three partners and the ultimate American dream that resulted in a legendary brand that has touched the lives of boaters and watersports enthusiasts all over the world.

Dick devoted his life to boating.  For him, boating was not just a business, it was his life and a way that he could give back. For more than forty years, he unselfishly committed himself to the recreational marine industry. Dick was always the first in line to give his time and resources when the industry called.

Many young professionals in the marine industry, saw Dick as a mentor.  He led by example by not only building a strong, respected company but by also having the ability to look beyond the four walls of Indmar to help improve the entire industry.  In 2002, he was awarded the prestigious NMMA Chapman Award which recognized his contribution to boating for the benefit of the industry and the public.  In 2004 he was inducted into the NMMA Hall of Fame, which recognized his substantial and lasting contributions toward the advancement of the marine industry.

Correct Craft President and CEO Bill Yeargin stated “Dick Rowe is a legend in the boating industry. His Hall-of-Fame career is an example of outstanding innovation and industry support. When Dick spoke, people in our industry listened. He was very highly respected.”  Yeargin added “Dick did what few people could do when he started Indmar Marine Engines and, with his son Chuck, grew it into an industry-leading supplier of engines. The boating industry is much better today because of Dick Rowe and Indmar Marine Engines.”

Dick’s commitment to the marine industry was an inspiration not only to his colleagues but to his family that he leaves behind.  He was preceded in death by his parents and loving wife Donna Rowe.  He is survived by his children Chuck (Diane) Rowe and Kathy (Joe) Tidwell; grandchildren Chris Rowe, Jennie (Mike) Escarre, Wendy (Billy) Likes, Sandy Wiedmeyer, Amy (Brad) Thomas and Audra Tidwell; great-grandchildren Jacob and Josh Likes, Hunter, Jordon and Kaitlyn Thomas, Nickolas and Lindsey Wiedmeyer, Paxton and Chase Escarre; and countless close friends that he considered family.

In lieu of flowers, please consider making a donation to the charity of your choice or the Tunnel to Towers Foundation, 236 Hylan Blvd., Staten Island NY 10306 or www.t2t.org

About Indmar Marine Engines
Indmar is the world’s largest privately held manufacturer of gasoline-powered inboard marine engines. Indmar has a pedigree going back nearly 51 years in the inboard marine industry and a proud tradition of pointing the way forward. Indmar was the first inboard manufacturer to deliver fuel injection, and custom-calibrated engines and the first to produce an inboard engine with a catalyzed exhaust, which is now the industry standard. Today, this legendary brand delivers an inimitable mix of unrivaled performance, meticulous craftsmanship, and ground-breaking innovations – charting a course for others to follow.  Indmar operates advanced manufacturing facilities in the U.S. with distribution centers in Millington, TN, Merced, CA and Clarkston, WA.   Indmar is operated by Correct Craft subsidiary Liberty Technologies which also manages PCM Engines, Crusader Engines, Levitator Engines, and Velvet Drive Transmissions.  For more information, please visit www.indmar.com.