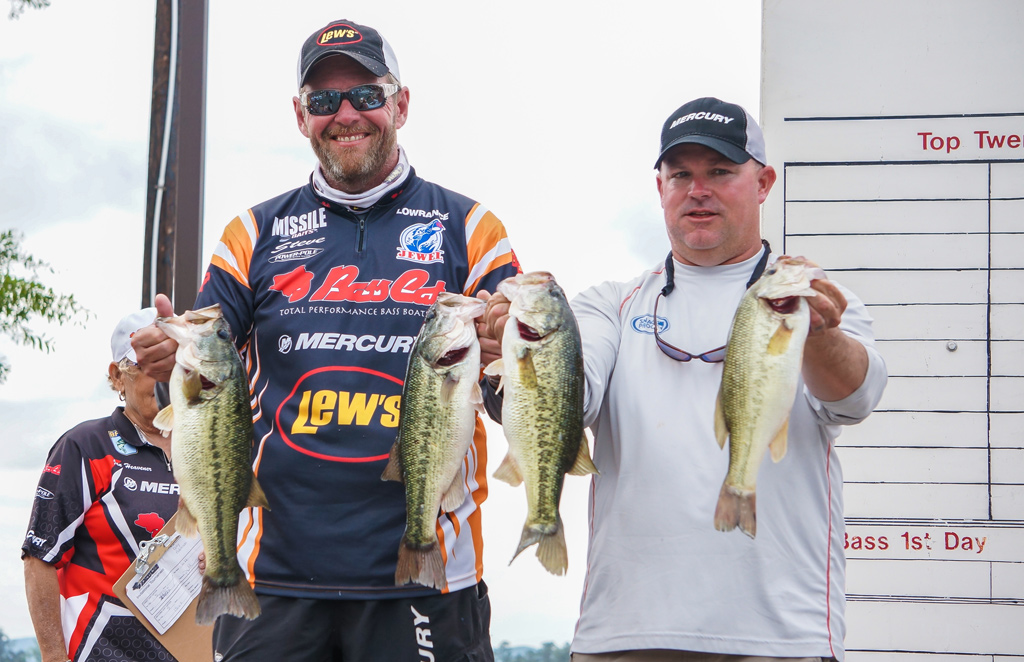 GUNTERSVILLE, AL (April 24, 2017) – Steve Doty of Jonesboro, Ark. and Tracy Robinson of Gadsen, Ala., added 15.68 pounds to their tournament-best Day One weight of 23.46 pounds to beat over 250 teams and win the 2017 Bass Cat Owners’ Invitational on Alabama’s Lake Guntersville. Sebastian DeRoy of Orillia, Ont., and Christopher Martin of New Hope, Ala., had 15.64 and jumped from 3rdplace to 2nd, but it was not enough to catch the leaders.

Doty and Robinson made it look easy, going wire to wire, but they had their struggles along the way. Yesterday, they had two fish for 12 pounds in the boat before the second flight came through. Today, they were in the last flight and rushed through rough water to their first spot only to find a boat not in the tournament sitting smack dab on the juice. The operator confirmed that he already had a 6 pounder a 5 pounder in the livewell. They didn’t catch a large number of keepers either day – 8 or 9 on Friday, and 7 or 8 on Saturday – but they stuck with a game plan that produced quality over quantity.

“They were transitional fish,” Doty said. “In between the river and the spawning areas, using the creek channel as a highway. Oddly enough, some had eggs and some were without eggs. They were passing each other coming and going.”

Their primary big fish tool was a 6 1/2 inch Producer Swimbait fished on a 1 ounce head with a large hook. “That bite was slow,” Doty recalled. “We threw it a lot and when it didn’t produce Tracy had to remind me that it was producing our bigger fish.” Their secondary lure was a green pumpkin jig with a Strike King trailer. “I never took it off all weekend. By the end of today I’d worn all of the paint off dragging it over shell beds.”

The pair fished the tournament out of Doty’s 2017 Puma FTD, his sixth Bass Cat. “I haven’t sat in a bad one yet,” he said. “But what I really like about the company is the people. Not just Rick (Pierce), the people at the plant or the staff at Bull Shoals Boat Dock. I also like how approachable the pro staff is and all of the friends I’ve made among other owners. I grew up in Arkansas, and I watch this tournament for years, always envious of everyone running a Bass Cat.” This was Doty’s fourth Owners’ Invitational, and while he hadn’t previously come close to winning one, he did win an Owners’ Regional Event last year after fishing two regional events. He plans to fish at least two more this year. “It’s like no other boat or company in the world.”

For the win, Doty and Robinson won a 2017 Bass Cat Margay and matching trailer.

The big bass of the tournament weighed 7.44 pounds and was caught by the Batesville, Ark., team of Le and Littleton on Day Two.

Terry Hogan of McRae, Ark., won a fully rigged 2017 Bass Cat Cougar FTD in a random drawing. This grand prize, valued at over $70,000 includes a MotorGuide trolling motor, Humminbird electronics and a Mercury outboard. Drawing emcee Kevin Short asked Hogan onstage “Why are you so nervous?” and the only thing that the eventual winner could say was “I feel lucky.”

In the various “trash fish” pots, the Wisconsin team of Rautenberg and Delaney won the striper pool with a 3.46 pound specimen, and the Alabama team of Carter and Fish caught the largest perch.