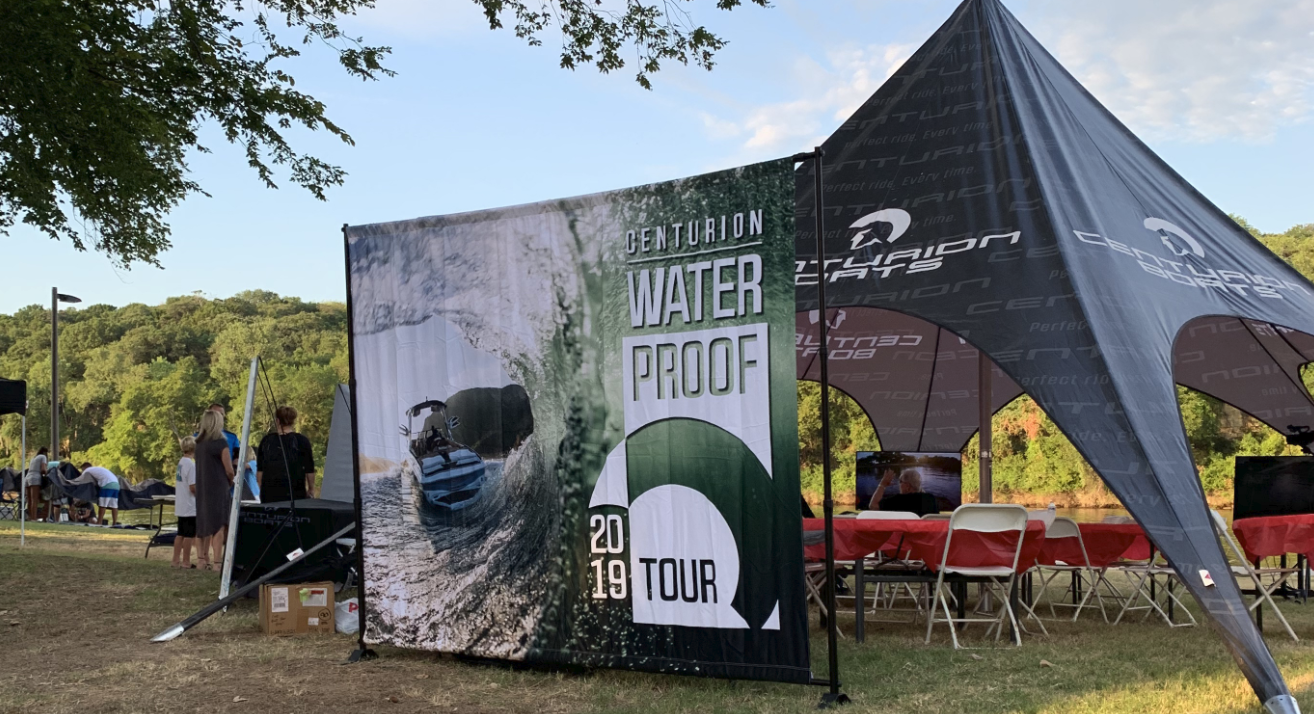 WACO, TEXAS (August 3, 2019) – The first annual Texas stop of the Centurion Boats Water Proof Tour, presented by Roswell Marine, came to a close Saturday afternoon as surfers braved the Lone Star heat with an exciting afternoon of wake surfing action. The water temperature clocked in at over ninety degrees on Friday with the outside temperature coming in around ninety-seven, however, the Texas sun gave surfers a break on Saturday as the weather cooled off just in time for the runs that would determine final placements.

During both days of competition riders slashed up the massive Ri237 wave on the Brazos river with Centurion team riders performing exceptionally well. The wave gave plenty of push and room to nail a variety of combos and big air tricks. Surfers in every division put on impressive shows, former marine biologist and newest Centurion family member Holly Allaire competed in the female masters division riding regular, goofy, and switch. She nailed most of her tricks regardless of side, a very impressive performance in any division.

When all was said and done Centurion team riders dominated the stage with each pro and semi pro division featuring at least one team athlete at the podium and most featuring multiple. In the pro male surf division the top three spots were filled by Centurion riders as Connor Burns took first, Keenan Flegel took second, and Zane Montgomery took third. Furthermore, plenty of other Centurion team riders, including Ashley Kidd, Sara Tallon, Jarrett Scribner, Lara Latham, and Zoey Montgomery, also placed in the top three at the end of the competition. All in all it was a very successful event for the Centurion Boats team. You can find full results on the CSWA website here.

Brazos Park East provided an awesome venue for the event as attendees were closer to the action than typical and were provided plenty of shade all throughout the park. Apart from the competition attendees had plenty of fun in the sun with ice cream, burgers, and Centurion demos happening on site. It was the perfect day to beat the heat and get out behind a new Centurion. WCCCTV even made an appearance to cover the event for the local news. Needless to say the Texas stop on the Water Proof Tour was one to remember.

About the Water Proof Tour: The Water Proof Tour, presented by Roswell Marine, is Centurion and Supreme’s eight stop series sanctioned by the Competitive Wake Surfing Association (CWSA) as a part of the World Series of Wake Surfing. The series has now taken the world’s best wakes, waves, and ride all over the country and all over the world with stops in Arizona, Washington, Texas, Japan, South Korea, and Canada. Don’t miss out on some of the best wake surf riders in the world and don’t miss your chance to get out on the water, we’ve got your number. Centurion boats gives you the perfect ride, every time. To learn more about the Water Proof Tour, visit www.waterprooftour.com.