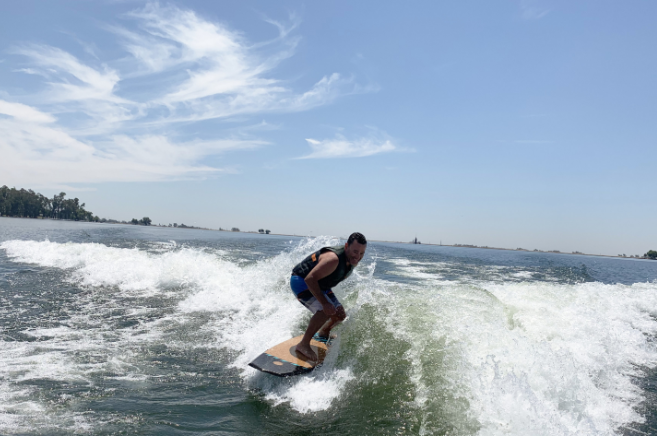 Eric has been boating for most of his life, you could say that he has sort of always been a boat guy. For well over 40 years Eric has spent time out on the water skiing, wake boarding, and wake surfing behind boats of all shapes and sizes. In fact, the first time Eric surfed behind a boat was in the late 1980s! Long before wake surf boards, let alone wake surf boats. They used their old ocean surfboards and put windsurf straps on them. It was cumbersome and awkward compared to today’s technology, but it got the job done.

When Eric’s son Teague came around it was a no brainer that lake life would be something passed down to the next generation. So, you could say Teague has also sort of always been a boat guy, albeit for just a few years less. Eric and Teague enjoy spending time out on the water with the rest of their family as it allows them time together away from the distractions of everyday life.

Being on the front-end wake surfing Eric knew about the Centurion brand. In fact, two boats ago he and his family owned a Centurion! Despite their enjoyment on that boat they decided to go in a different direction with their next purchase. However, with their current boat not quite living up to the surf wave they were looking for, Eric’s family was ready to get themselves into another Centurion. It was this motivation that prompted a factory tour this summer.

Eric and Teague made their way to the Centurion Boats factory in Merced, CA. After learning about the production process (from the VIP hull construction through the interior fit and finish) the two were excited to see the new innovations on Centurion’s latest models. After their tour the two made their way to Yosemite lake with representatives from the factory to prove it to themselves on the water with a test ride. Teague was dying to get out behind a Centurion on the water, in their current boat he was having difficulties achieving his goals.

Once out on the water Teague threw on his vest and jumped in, excited and ready. On his first run it was apparent that the wave on this boat was different from the wave he was used to, as he slowly worked his way back, back, and further back on the wave you could begin to see a familiar tugging at the corners of his mouth, as one of the biggest Centurion smiles we’ve ever seen leapt across his face. Teague’s excitement made it clear to everyone how far back on the wave he was, 26 feet is no joke.

Teague didn’t want to quit, he ripped it up on Lake Yosemite. After he’d finally had his fill it was Eric’s turn, Eric was blown away by the wave too. When asked what make a difference between Centurion and other brands, Eric commented, “The fit and finish is amazing in the ri and fi series.  We were impressed with how smooth the ri237 cut through the bumps and the hop.  Super buttery ride!  And the wave……holy cow!  The wave was awesome. It had an amazing amid notifying push and it was so cool how quickly it could be adjusted.”

At the end of the day it’s about the family. When asked why boating is something that he and his family enjoyed Eric said, “We enjoy being together on the lake, being outdoors and just having fun behind a boat.” There really is nothing like it.