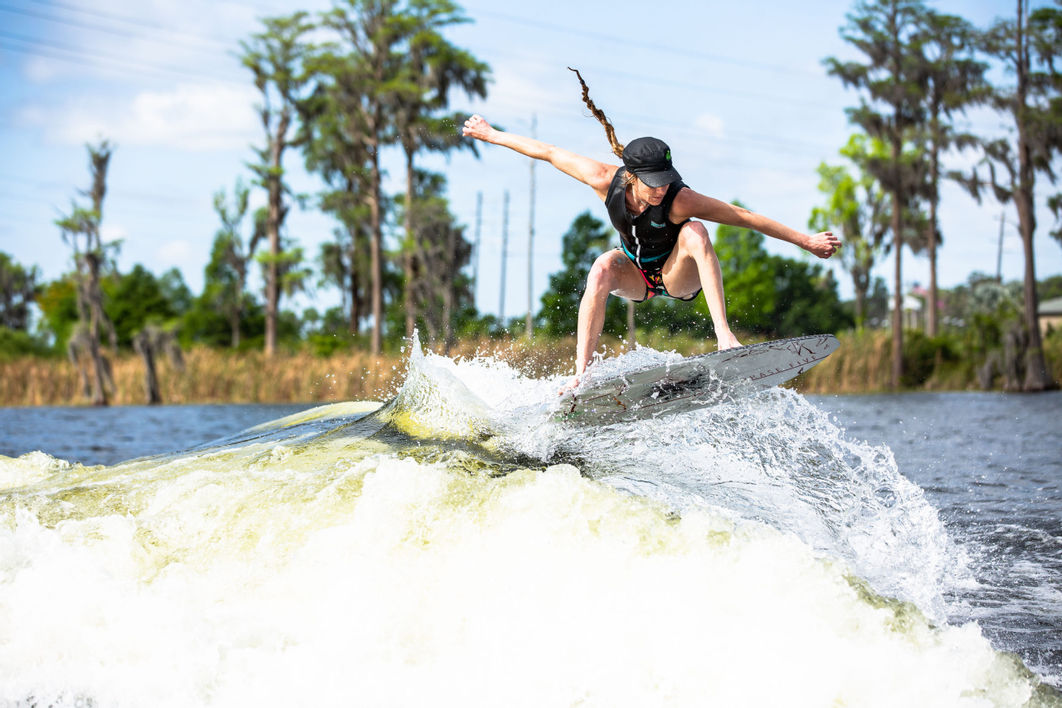 For anyone on the competitive wakesurfing circuit, Caroline Villeneuve’s status as a pioneer and legend in the sport are well known, but it is now official as Villeneuve has been presented with the Competitive Wakesurfing Association’s most prestigious award, the Legend Award, for her contributions to the sport.

“I can’t even begin to express what an honour this is,” says Villeneuve. “I’ve dedicated the past 14 years of my life to this sport and it has given me back so much in return. Receiving the Legend Award is so deeply meaningful, I am just blown away.”

When you look at the list of Villeneuve’s accomplishments, it’s easy to see how she has earned her reputation on the water as one of the World’s best wakesurfers.  Since her first competition in pro women’s surfing in 2007, she has participated in 81 competitions as a professional athlete and has stepped onto the podium an astounding 70 times. Among her achievements, 40 first place finishes and 22 second places.   Villeneuve recently represented Canada on the world stage at the Centurion World Wakesurfing Championships – her tenth appearance at the international event.  She had a podium finish in 8 out of those 10 outings, including a world title in 2015.   “When I look back over the past 14 years at the way the sport has grown and changed, and I watch the new athletes who will continue to shape the future of the sport, I am incredibly proud of the contribution I’ve made and the impact I’ve had,” adds Villeneuve.

As outstanding as these achievements are, Villeneuve’s contributions away from the water are equally, if not more, impressive.  She founded the H2O School in 2011, the Rocky Mountain Wakesurfing Association in 2012, and joined the Competitive Wakesurfing Association (CWSA) Board in 2013 as the first international director to serve on the Board, a volunteer position she held for seven years.  She was named the Wakesurfing Person of the Year in 2015 for her leadership and involvement in the sport and for her efforts to create the current World Ranking System with fellow CWSA Board member Jon Shields. This ranking system is now used and recognized around the world.   She has recently become involved in Waterski Wake BC (WSWBC) to help develop athletes in BC.

She is known for building grassroots athletes and events and as an event organizer brought the first World Series of Wake Surfing event to Canada. The Koocanusa Wakesurfing Challenge drew athletes from around the globe and has been critical to the development of other sanctioned events and the sport in Canada.   She has also served as a head judge and pro-level judge at events around the world.  Perhaps her greatest legacy in the sport is the way she nurtures, encourages and teaches the athletes she coaches.  She has developed wakesurf athletes from Canada, the United States, Europe, Russia, Dubai, Bahamas and Japan.  “I am so passionate about the sport, I can’t help but share it.  Coaching is not only something I do, it’s something I truly love and being able to share it with others is a bonus,” says Villeneuve.  And share it she has, having coached wakesurfing or taught boating lessons to thousands of people since 2007.

Villeneuve, who lives in Fernie when she is not running the H2O School on Lake Koocanusa in the summer months, received the Legend Award as part of the 2020 World Wakesurfing Awards. She joins an elite group of people whose contributions have made a permanent impact on one of the world’s fastest growing sports.

“I’d really like to take the time to thank the sponsors who have supported me without whom I would definitely not have been able to accomplish half of what I have achieved over the years: Centurion Boats, Absolut Watersports, Phase 5 Wakesurfers, Wake Ballast, Wake Canada, H2O School Ltd., Commit Snow & Skate, BB Talkin USA and Shuswap Ski & Board,” adds Villeneuve.