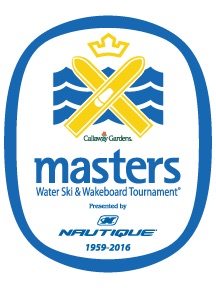 Brooke Baldwin claimed her second Junior Masters Slalom title tying the course record with 4@38-off in the final round run off with Paige Rini placing second and Jaimiee Bull (CAN) in third. The Junior Men’s Slalom final went to Ryan Canepa (USA) running 2.5@38-off to win the title, followed by Robert Hazelwood (GBR) in second and Jakob Bogne (SWE) in third.

The award-winning Super Air Nautique G23 wake turned dreams into reality as it does every year on Robin Lake during the Junior Men’s Wakeboarding semifinal. James Loisel (USA), Mac Schramm (USA), and Jason Soven (USA) all went huge with technical runs that earned them a spot in the final of the most prestigious event in watersports. The pressure was on in the final round forcing each rider to put together their best run. James Loisel was a man on a mission with a stand up pass that included his signature cuffed toeside-backside 720 for his first ever Masters win!

An invitation to compete in the Masters is universally considered an acknowledgement of achievement for reaching the pinnacle in a given watersports discipline – only the world’s most elite athletes compete at the Masters. To view the 2016 criteria please visit the Masters website. This tournament is sanctioned by IWWF/USA Water Ski and WWA. Watch all of 57th Masters action live on Saturday May 28th starting at 8:00AM EDT, please visit masterswaterski.com.

General Motors Co. (NYSE:GM, TSX: GMM) and its partners produce vehicles in 30 countries, and the company has leadership positions in the world’s largest and fastest-growing automotive markets. GM, its subsidiaries and joint venture entities sell vehicles under the Chevrolet, Cadillac, Baojun, Buick, GMC, Holden, Jiefang, Opel, Vauxhall and Wuling brands. More information on the company and its subsidiaries, including OnStar, a global leader in vehicle safety, security and information services, can be found at http://www.gm.com.