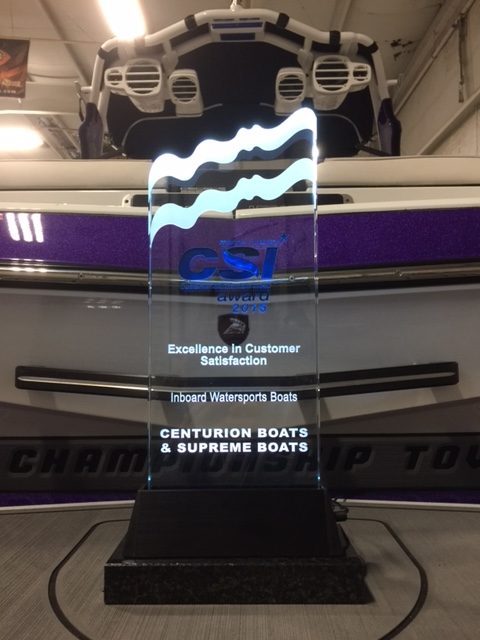 Over the last 12 months Centurion and Supreme Boats have combined to become the fastest growing towboat brands in the industry. Centurion & Supreme Boats is showing nearly 80% growth when compared to last year’s retail registrations.

When asked about the Centurion & Supreme Boats success, the President, Paul Singer, had this to say. “Increased retail sales is great and marks the end of an incredible growth year for this Correct Craft Company, but earning the NMMA CSI Award is the real indicator that our team is focused on the right things.” Singer continued, “I could not be more proud of our team’s commitment to product quality and customer service. With this direction there is much more success to come.”

The Marine Industry CSI Awards honor boat and engine manufacturers who actively measure customer satisfaction and pursue continuous improvement to better serve their customers. Award recipients achieved an independently-measured standard of excellence of 90 percent or higher in customer satisfaction over the past program year, based on information provided by customers purchasing a new boat or engine during the period between January 1, 2016 and December 31, 2016. Participating manufacturers must survey all new boat buyers during this period. For this reporting period, the program surveyed more than 122,000 customers.

“Fostering a culture of excellence in customer satisfaction not only builds exceptional brand loyalty, but creates an outstanding boating experience, ensuring that today’s boater remains the boater of tomorrow, and promotes industry growth by developing boaters into lifestyle advocates,” notes Robert Newsome, vice president of engineering standards and membership for NMMA.  “We congratulate Centurion and Supreme Boats for their unwavering commitment to their customers.”

About NMMA: National Marine Manufacturers Association (NMMA) is the leading association representing the recreational boating industry in North America. NMMA member companies produce more than 80 percent of the boats, engines, trailers, accessories and gear used by boaters and anglers throughout the U.S. and Canada. The association is dedicated to industry growth through programs in public policy advocacy, market statistics and research, product quality assurance and promotion of the boating lifestyle. For more information, visit NMMA.org.

About Centurion Boats: Innovation has always been the hallmark of Centurion boats. Now, thanks to new product, leadership and Correct Craft company culture, innovation is running deeper than ever, into a re-imagination of the Centurion brand. Water sports enthusiasts are embracing Centurion boats for the world’s best waves, wakes and ride, as well as ambitious design and inspired craftsmanship. Time to re-imagine your ride, in a Centurion. http://centurionboats.com.