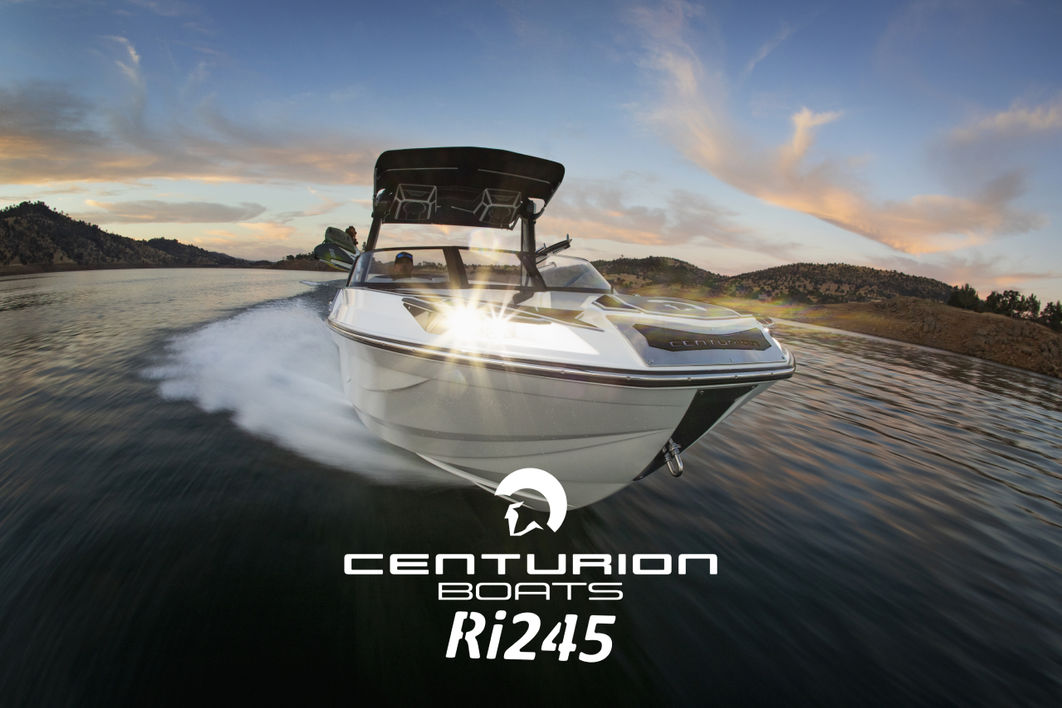 Merced, CA (August 10th, 2020) – If Centurion is the evolution of the wake boat, the all new 2021 Ri245 is a revolution. This 24.5-foot wake boat is the epitome of a fundamental and sudden shift in power. But this new Centurion is not turning the tide in the battle for wake surfing boat mindshare based only on size or an extra large price tag. The Ri245 is attacking all areas of innovation simultaneously with a deeper, longer, thoughtfully refined, more aggressively styled and better performing wake surf boat; that manages to hold a reasonable price point. The world’s best waves, wakes and ride have gotten even better with the evolved running surface of the Opti-V Hull. The look of the Centurion Ri245 merges the depth of the Ri Series with the sharp lines of the Fi Series achieving an aggressive, head-turning style. Centurion engineers have added a number of lake life-improving refinements to the Ri245 like Lay-flat Sun Pad Lounge Seats. The price of admission for a top wake boat is size and make no mistake, the Ri245 is large and in charge with room for 16 comfortably. The Ri245 is Revolution innovated. Let us prove it to you.

The world’s best waves, wakes and ride just got even better with the introduction of the 2021 Centurion Ri245. This new Centurion wake boat moves past an evolution in design to a revolution in design with an innovated running surface that takes the Opti-V to another level. Not many companies would mess with a good thing, but Centurion Boats is not most companies. As a Correct Craft Company, Centurion’s main objective is making lives better and that result comes with continuous product improvement. The Opti-Hull has been innovated to include more hook, which changes the running attitude of the boat to get the nose down and the entire “v” of the running surface cutting through chop and/or displacing water for wake surfing and wakeboarding. The new QuickSurf Pro Surf System has also been redesigned with longer blades featuring a turned-down trailing edge to create even more lift opposite the surf side. This creates more water displacement on the surf corner for an even wider range of surf wave adjustment. The Ri245 performance also benefits from 7 independently filled and drained ballast areas placed evenly throughout the boat. They combine for as much as 5650 pounds of ballast from the factory. Available RAMFILL accounts for half of the Ri245s ballast and fills in 90 seconds. All of this wake surfing performance and the Ri245 still manages fuel with more than 50% better efficiency than other comparably sized models.

If the revolutionary performance of the 2021 Centurion Ri245 brings out your inner water sports warrior, then the aggressive styling shows everyone exactly what’s beneath the surface. The Ri245 produces the world’s best waves, wakes and ride; it also looks the part. The chiseled lines of the Ri245 are only part of this boat’s telling exterior. The two-tone lit Centurion-branded front grill lets you know this is an Ri at first sight. Then the two pair of Baja Racing docking lights finish that look shining with 4800 lumens (lm) on each side. The side profile of the boat reveals the perfect combination of shapes, textures and materials visually communicating Centurion’s World-Renown wake surfing reputation in an eye-shot. Black and brushed billet anodized vents created by PTM look as if they were designed to go specifically with the Ri245 because they were. The RAMFILL and model designator vents are backlit so there is no mistake this is a Centurion Ri245. Once you can look past these signature elements, you become aware of the DropZone Auto Tower that is standard on the Ri245. DropZone Auto Tower by Roswell folds quick and smooth with the push of a button thanks to floating Linear Actuators. The DropZone offers even more function with thoughtful touches like surf-side tow points and hangers. It also provides 40% more strength thanks to the water drop extruded construction that compliments the lines of the Centurion Ri245 perfectly.

The Ri245 features thoughtful refinements that make your life better. The new Revo Side by Side 12” X 12” Touch Vision HD Dash is the brains of the operation with graphical control over nearly every boat system. These new larger screens are not only high definition, they are extremely high functioning. The stereo can now be controlled through the Revo SxS along with QuickSurf Pro, RAMFILL, ZerOff speed control and the Silent Stinger Wake Plate. The Ri245 also comes standard with a Wireless Clamping Cell Phone Charger by PTM. Additionally, this year’s software has the first real time trip and fuel consumption data. It’s no secret which wake boat is the most efficient and we’re ready to prove it to you.  While the captain has complete control over the operation of the Ri245 as many as 15 of his or her closest friends have the opportunity to put everything away beneath hinged, shocked lounge seats. Passengers also have the ability to customize their seating layout with an optional flip-up lean back on the passengers-side as well as a standard 4-position slide seat with optional plug-in lean backs that can face forward or back. If lounging is more your style, the Ri245 has two Lay-flat Sun Pad Lounge Seats with robust ratchet hinges for sturdy, but simple use.

The new 2021 Centurion Ri245 is a larger Ri Series wake boat, but that is just the beginning of this story. This 24.5-foot wake boat is the epitome of a fundamental and sudden shift in power. But this new Centurion is not turning the tide in the battle for wake surfing boat mindshare based only on size or an extra large price tag. The Ri245 is attacking all areas of innovation simultaneously with a deeper, longer, thoughtfully refined, more aggressively styled and better performing wake surf boat; that manages to hold a reasonable price point. The Ri245 is Revolution innovated. Let us prove it to you.