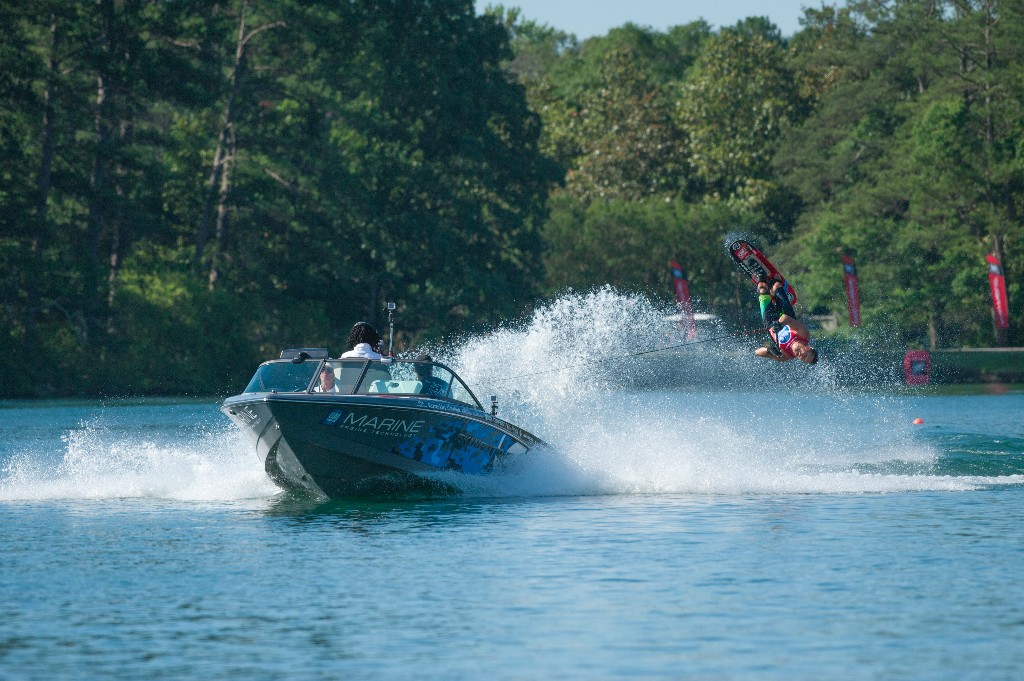 During the Pro Women’s Tricks semifinal there were six women battling for four spots in the Final round taking place tomorrow. The young guns shined today as Anna Gay (USA) broke a course record with 10,220 points with two passes that landed her in the top spot. Neilly Ross (USA) came in a close second and Erika Lang (USA) in third, while Whitney McClintock (CAN) rounded out the 4th spot for an all Nautique athlete final. In the Pro Men’s Trick portion of the event, Adam Pickos (USA) was right at home behind the record-setting Ski Nautique 200 and won the Semis, with Team Nautique athlete Aliaksei Zharnasek (BLR) in second. Pierre Ballon (FRA) and Martin Kolman (CZE) skied well and finished in 3rd and 4th respectively.

The Pro Women’s Slalom event saw Regina Jacquess (USA) and Team Nautique athlete Whitney McClintock break course records, with Regina just edging out Whitney to earn the top seed going into tomorrow’s Final round. They’ll be joined by Brooke Baldwin (USA) and Manon Costard (FRA) in the Finals. In the Pro Men’s Slalom semifinal, the crowd saw Nautique Team athlete Nate Smith (USA) and Will Asher (GBR) tied for first place after both running 3@41-off. Fellow Nautique athlete Jon Travers (USA) tied for third place with Steven Neveu (CAN) after they ran 2@41-off. We’ll see all four of them in tomorrow’s Final round.

The Pro Men’s Wakeskate semifinal showcased a new level of technical tricks and control behind the Super Air Nautique G23, with a ton of technical tricks from the world’s best wakeskaters. Making it to the final was Brian Grubb, Reed Hansen, Austin Polterock and Coco Mendez.

In Pro Women’s Wakeboarding, Nautique athletes Raimi Rutledge (USA) and Meagan Ethell (USA) both won their heats and made it into the Finals with Larissa Morales (MEX) and Tarah Mikacich advancing as well. During the Pro Men’s Wakeboard side of things, Nautique team rider Mike Dowdy (USA) was right at home behind the Super Air Nautique G23 landing multiple double flips to win his heat and advance to the Finals on Sunday. Harley Clifford (AUS) also won his heat with an insane run, with Nautique team rider Tony Iacconi (AUS) along with Cory Teunissen (AUS) both getting second place finishes in their heats and making it to the Sunday as well.

The Jump semifinals rounded out the day with Team Nautique athlete Ryan Dodd (CAN) winning his heat with a massive 233 foot jump. Freddy Kreuger (USA) overcame the odds after taking a hard crash on his first jump, only to advance with a 222 foot jump and a second place finish on his last attempt. Also advancing into the Final round was Damian Sharman (GBR) with a 220 foot jump, and Bojan Schipner (GER) with a 218 foot jump.

An invitation to compete in the Masters is universally considered an acknowledgement of achievement for reaching the pinnacle in a given watersports discipline – only the world’s most elite athletes compete at the Masters. To view the 2017 criteria please visit the Masters website. This tournament is sanctioned by IWWF/USA Water Ski and WWA.

About Nautique Boat Company: Celebrating 92 years of excellence in the marine industry, Nautique is a subsidiary of Correct Craft and has been on the waters of the world with a passion for innovation since 1925. Nautique is known to push the envelope of possibility on the water, and our owners have come to expect nothing but the absolute best. The Ski Nautique 200 has changed waterskiing with 24 world records, the G-Series has won numerous awards for wakeboard boat and wakesurf boat of the year while unlocking new possibilities in wakeboarding and wakesurfing, and our GS-Series has given families endless days on the water without compromise. Through our Nautique Cares initiatives we’re dedicated to not only making a difference on the water, but to people in need around the world. The world’s best ski boat, world’s best wake boat, and a company that cares. To learn more visit Nautique.com.