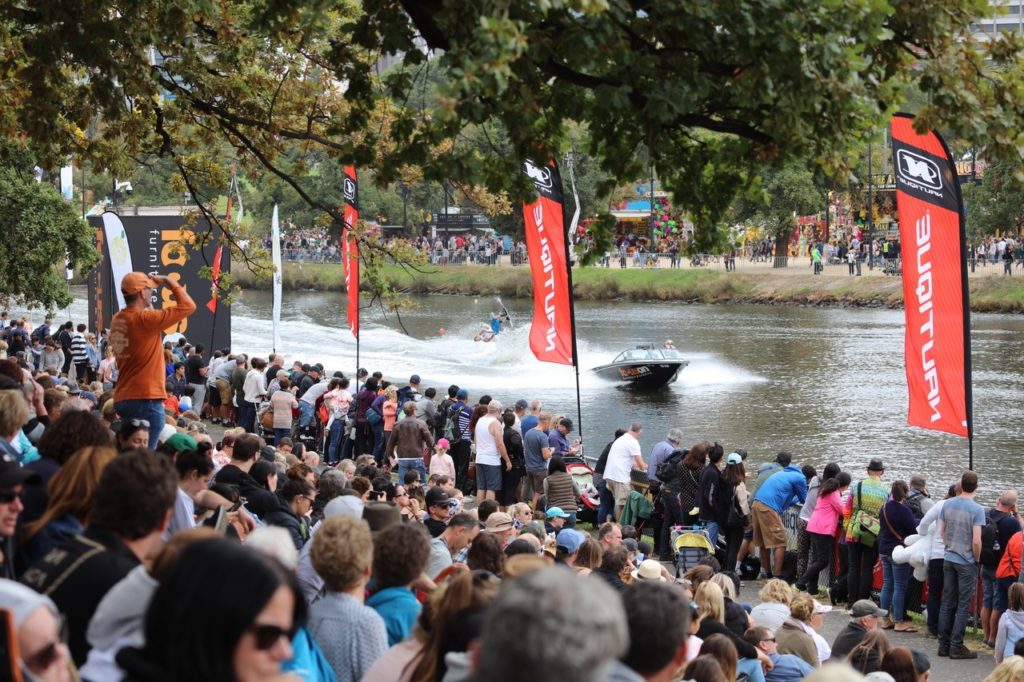 MELBOURNE, AUSTRALIA (March 12, 2018) – The 57th Moomba Masters capped off in Melbourne, Australia today with Nautique athletes claiming titles in numerous divisions. The record-setting Ski Nautique 200 and award-winning Super Air Nautique G23 delivered perfect pulls for the top athletes in the world to perform their best and progress their respective sports. The Yarra River set the stage and the Moomba Festival played an incredible host to the legendary event.

Nautique athletes dominated during the slalom and jump portions of the event behind the Ski Nautique 200. Nate Smith and Whitney McClintock both topped the podium during the Men’s and Women’s Slalom disciplines, while Ryan Dodd and Jacinta Carroll won the Men’s and Women’s Jump categories respectively. Another team Nautique athlete, Erika Lang, also took the win during the Women’s Trick event to strongly kick off her 2018 season.

During the finals, Nate Smith was in perfect form as he ran 3 buoys at 41’ (10.25m) off to take the win, while Whitney McClintock claimed her 7th Moomba Masters win by running 3 buoys at 38’ (11.25m) off. Jacinta Carroll set a new course record during the Women’s Jump event, flying 187 ft (57.1m) to claim yet another victory in her already famed career. Ryan Dodd also continued his reign of dominance taking the win during the Men’s Jump event flying 225 ft (68.5m). Erika Lang took home the Moomba Masters title with a score of 9,240 in the Women’s Trick finals.

“I am very excited for my first Moomba win in a while!” said Nautique athlete and Men’s Jump winner Ryan Dodd. “It’s always an exhilarating experience competing on the Yarra River. I’m so thankful to have been training behind the Ski 200 on a daily basis to give me a sense of comfort when competing in such conditions. Overall a great event and I’m thankful to be a part of it!”

“I’d like to congratulate all of the Nautique athletes on their incredible performances at this year’s Moomba Masters,” said Nautique President Greg Meloon. “Every year this event kick starts the new year showcasing the very best skiers and wakeboarders to the largest crowds in watersports. We’re very proud to pull these amazing athletes with the record-breaking Nautique boats.”

About Nautique Boat Company: Celebrating 93 years of excellence in the marine industry, Nautique is a subsidiary of Correct Craft and has been on the waters of the world with a passion for innovation since 1925. Nautique is known to push the envelope of possibility on the water, and our owners have come to expect nothing but the absolute best. The Ski Nautique 200 has changed waterskiing with 25 world records, the G-Series has won numerous awards for wakeboard boat and wakesurf boat of the year while unlocking new possibilities in wakeboarding and wakesurfing, and our GS-Series has given families endless days on the water without compromise. Through our Nautique Cares initiatives we’re dedicated to not only making a difference on the water, but to people in need around the world. The world’s best ski boat, world’s best wake boat, and a company that cares. To learn more visit Nautique.com