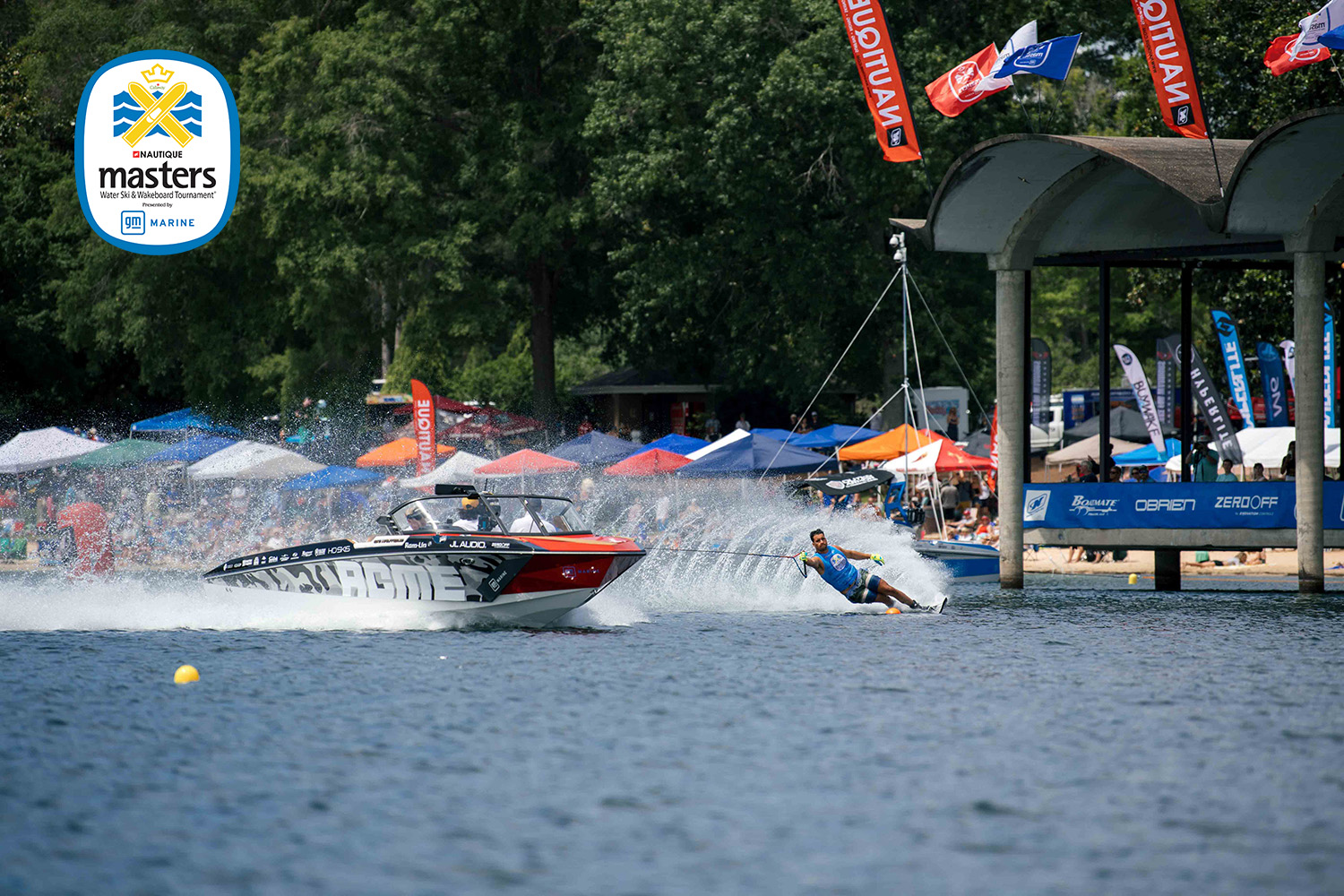 Pine Mountain, GA (May 29, 2021) – The world’s most elite waterskiers and wakeboarders were out today at the 61st Nautique Masters Water Ski & Wakeboard Tournament presented by GM Marine! Perfect conditions led to some amazing performances, as all of the athletes were out to earn their spots in the final rounds tomorrow behind the award-winning Ski Nautique and Super Air Nautique G23.

During the Pro Women’s Tricks semifinal there were nine women gunning for four spots in the final round taking place tomorrow. After some incredible performances, it was Nautique Team athlete Anna Gay (USA) winning the heat with a score of 10,190 followed by Neilly Ross (CAN) and Giannina Bonnemann (GER). Coming in fourth spot and earning her spot into the final round was Paige Rini (CAN).

“After a long break in the competitive scene I was pretty nervous competing today, but I am very excited to have stood up both passes and that I get a chance to compete in the finals tomorrow,” said Nautique Team Athlete, Anna Gay.

Behind the world record-setting Ski Nautique, the Pro Men’s Trick semifinal round saw Team Nautique athlete Pato Font (MEX) break a course record and take the top spot after getting a score of 12,220! Also making their way into the finals were Adam Pickos (USA), Louis Duplan-Fribourg (FRA) and Aliaksei Zharnasek (BLR).

“I am super pumped to have broken a 14-year old course record, and be back competing on Robin Lake,” said Nautique Team athlete Pato Font. “I am excited to be sharing the Mexican flag with my cousin Pablo in the Parade of Champions and to ski in Finals tomorrow!”

During the Pro Women’s Slalom event, the crowds witnessed team Nautique athlete Whitney McClintock Rini (CAN) earn her spot in the finals coming in 4th place. Manon Costard (FRA) won the heat behind the record-setting Ski Nautique, with Jaimee Bull (CAN) and Brooke Baldwin (USA) in the second and thirds spots respectively.

Fans watched as Nate Smith (USA) took first place and the top seed going into tomorrow’s final round of the Pro Men’s Slalom division. Following Nate and making it into the finals tomorrow behind the Ski Nautique are Will Asher (GBR), Freddy Winter (GBR) and Dane Mechler (USA).

In Pro Women’s Wakeboard division behind the Super Air Nautique G23, Mary Morgan Howell (USA) stunned the crowds with her skill as she and Meagan Ethell (USA) both won their semifinal heats. Joining them in tomorrow’s final round will be Carro Djupsjö (SWE) and Bec Gange (AUS) who also put together two stellar passes.

During the highly-anticipated Pro Men’s Wakeboard division, the G23 set up perfect wakes for a first-time rider in the Pro division at Masters, Thomas Herman (USA), to blow the crowd away with his technical ability and heat-winning run. Nautique rider Cory Teunissen (AUS) also rode smooth behind the Super Air Nautique G23 and grabbed second in his heat, sealing his spot in the finals tomorrow. It was Nic Rapa (AUS) winning his heat as well, and Guenther Oka (USA) grabbed a second place finish and will be making it to the Sunday final round as well.

During the Pro Women’s Jump division, it was Lauren Morgan taking the win as the semifinal top spot with a jump of 175 feet (53.3m) jump behind the GM Marine powered Ski Nautique. She was followed by Hanna Straltsova (BLR) with a 172 foot (52.4m) jump, Giannina Bonnemann (GER) with a 160 foot (48.6m) jump, and Taryn Grant (CAN) with a 159 foot (48.2m) who all earned their place in tomorrow’s final round.

The Men’s Jump semifinals rounded out the day with Joel Poland (GBR) jumping 222 feet (67.4m) behind the Ski Nautique. Jack Critchley (GBR) also advanced with a 210 foot (63.9m) jump and a second place finish, as well as Felipe Miranda (CHI) and Freddy Krueger (USA) also advancing into the final round after jumping 209 feet (63.6m) and 208 feet (63.2m) respectively.

Congratulations to Junior Masters Slalom Champion Luisa Jaramillo (COL), who competed in the junior head-to-head exhibition earning a scholarship courtesy of O’Brien, and Parker Swope (USA) for earning the Nautique scholarship as well.

An invitation to compete in the Masters is universally considered an acknowledgement of achievement for reaching the pinnacle in a given watersports discipline – only the world’s most elite athletes compete at the Masters. This tournament is sanctioned by IWWF/USA Water Ski and WWA.

About Nautique Boat Company:
Nautique is celebrating its 96th anniversary of delivering excellence in the marine industry. A subsidiary of Correct Craft, Nautique has been on the waters of the world with a passion for innovation since 1925. Delivering the very best waterski, wakeboard and wakesurf boats on the market, Nautique continues to drive progression with their award-winning technology and dedication to building the highest-quality boats imaginable. New technology, performance innovations and attention to detail are the cornerstones of what makes the Nautique brand the industry leader. Through the Nautique Cares initiative, employees and athletes dedicate themselves to not only making a difference on the water, but to extend their support to people in need around the world. The world’s best ski boat, world’s best wake boat, and a company that cares. To learn more visit Nautique.com