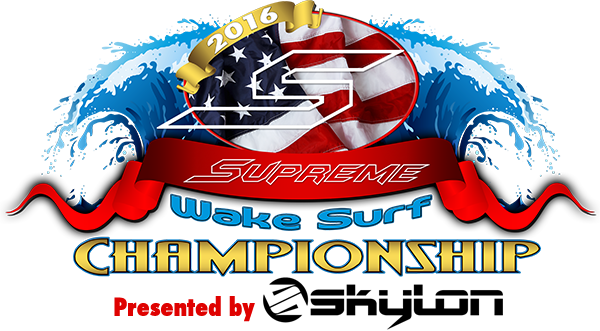 MERCED, CA (April 5, 2016) – The 2016 Supreme Wake Surfing Championship presented by Skylon is preparing to hit Lake Weir in Central Florida with wake surfing’s top amateurs and pros April 15th & 16th. The official towboat of the event, the 2016 S238 will be cranking out supreme waves for two solid days. The SWSC kicks off the U.S. leg of the World Series of Wake Surfing tour. This year the event has traveled across the country helping surfers to reign supreme on the East Coast behind Supreme boats. Orlando area Supreme Boats Dealer Transition Watersports is hosting the 2016 Supreme Wake Surf Championship presented by Skylon on Sandy Hook Beach in Ocklawaha, FL. Come to watch competitors surf supreme at the 2016 SWSC presented by Skylon.

Competitive Wake Surfing Association (CWSA) ranked surfers will take the water at the SWSC each morning at 8am EST. The Supreme S238 will pull the world’s best wake surfers until the last of 75 registered riders has surfed. The finals on the afternoon of April 16, 2016 will be followed immediately by the Supreme Wake Surfing Championship Awards. Divisions include both men’s and women’s and provide a range of age groups for both Surf Style and Skim Style riders. The top performers in the professional division will be awarded a total of $12,000.

The 2016 Supreme S238 is the official towboat of the SWSC. This 23-foot 8-inch water sports boat offers World-class performance, cool style, amazing accommodations and strong construction. The S238 allows you to wake, surf and reign supreme on the water. Get behind Supreme boats at the 2016 SWSC with Transition Watersports or anytime at a Supreme Boats Dealer near you.

The 2016 Supreme Wake Surfing Championship presented by Skylon is being managed by tournament directors Dennis Costa and Danny Biebricher. These wake surfing veterans are being supported by event hosts, Nate and Abigail Stockman owners of Transition Watersports. This team is dedicated to helping competitors reign supreme on the water. Many amazing performances are expected April 15-16, 2016. Come watch the 2016 SWSC at Lake Weir.

About Supreme Boats: World class towboats that reign Supreme. Supreme boats are World Class performance, style, simplicity and strength built to help water sports fanatics reign supreme on the water at an extreme value. To learn how you can wake, surf and reign Supreme visit www.supremetowboats.com.