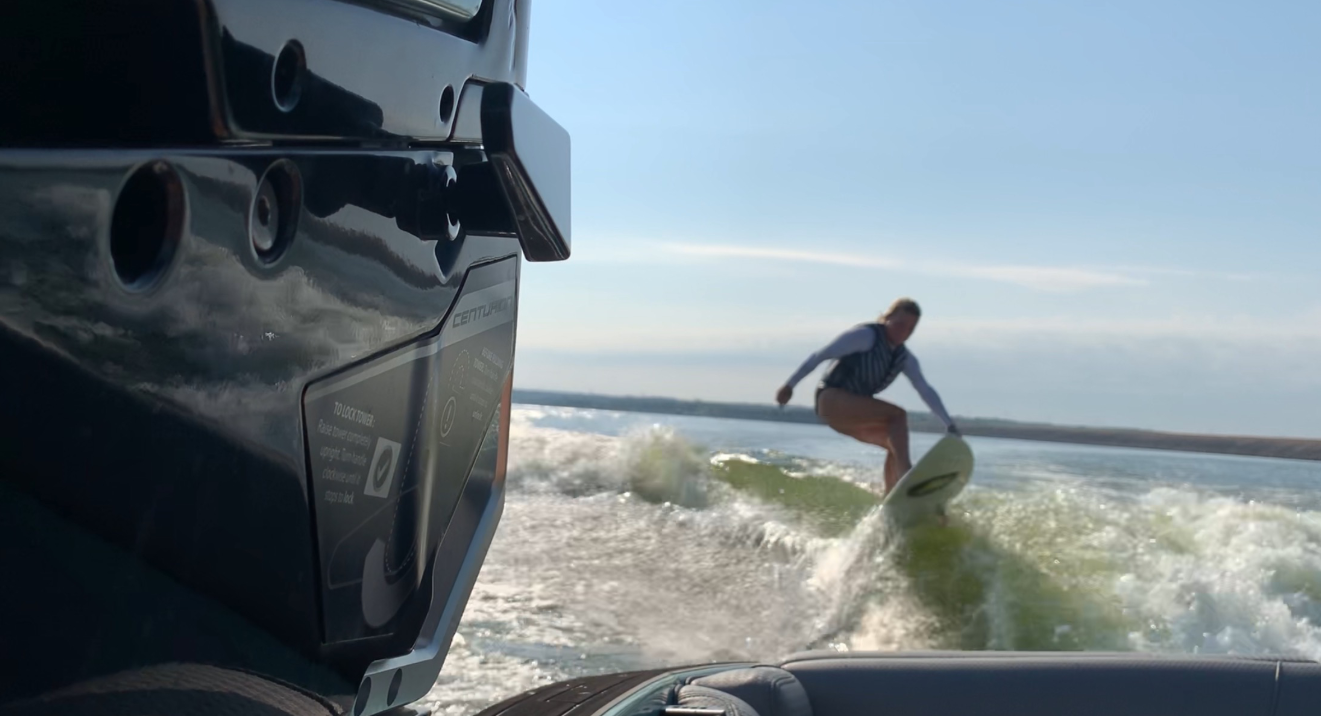 Like many people in the boating world Holly grew up around the water. During her childhood she lived near a private lake in Sparta New Jersey, a small town just outside of New York City. Holly spent hours as a kid kneeboarding and skiing behind a variety of lake boats. That childhood helped shape Holly into a lifelong athlete, in her 60 years she has competed at the highest level of several different sports. Holly was a member of her collegiate ski team, she’s lifted for the US Olympic team, and she’s even competed as a nationally ranked track cyclist.

Between her sporting escapades she went on to become a marine biologist and then an Aquatic biologist, dedicating years of her life to the field before retiring in 2003. Soon after retiring, Holly began a landscaping company as she channeled her focus into a new arena. It’s during this phase of her life that Holly stumbled across a new sport that would capture her attention in a way like never before, Holly discovered wake surfing.

Holly’s first-time wake surfing came after a family member’s memorial service just a few years ago, she was looking for a way to relax after a somber day. Tyler at VFW instructed Holly’s first lesson, on her first run she was a little unsure, however, being the athlete that she is she took like a fish to water, after all it’s no surprise that Holly was an ocean surfer at one point in her life. Her second run was perfect, what Holly found was a moment of peace. The lesson went incredibly well but the next day Holly was so sore she couldn’t walk!

Despite a brief bout of soreness Holly was all in, she was hooked on a new sport. She bought a used wakeboard boat in 2016 and converted it into a surf boat. In 2017 her construction business found a new level of success and Holly found herself ready to invest in a new boat made specifically for wakesurfing. As she explored options, she kept finding that Centurion’s boats were made with wakesurfing in mind, the fuel efficiency was also an attractive benefit that Holly found unique to the Centurion brand.

In 2018 Holly attended the Dallas Boat show with an aim to try a Centurion for herself. She connected with her local dealer at the show and scheduled a test ride. Holly got out behind the boat and was struck by how far back she could get on the wave. A Centurion Smile slipped across her face as she slipped further and further back on the best wave she’d ever experienced. Holly immediately fell in love with the world’s best wave and had to get a Centurion of her own. Holly now owns the best of both world’s Ri237, named Root Beer Float for its distinct Root Beer Metal Flake color.

These days Holly finds herself competing in the master’s division at national level surf competitions, she says, “I tend to do well because I train smart, discipline is key. You have to strategically work towards goals you’ve set out for yourself to continuously improve,”

At 60 years old Holly also noted that she values the physical benefits the sport brings, “You use your whole body in what’s a physically demanding but not physically taxing sport,” Holly continued, “I’ve got two replacement knees, if I can surf anyone can!”