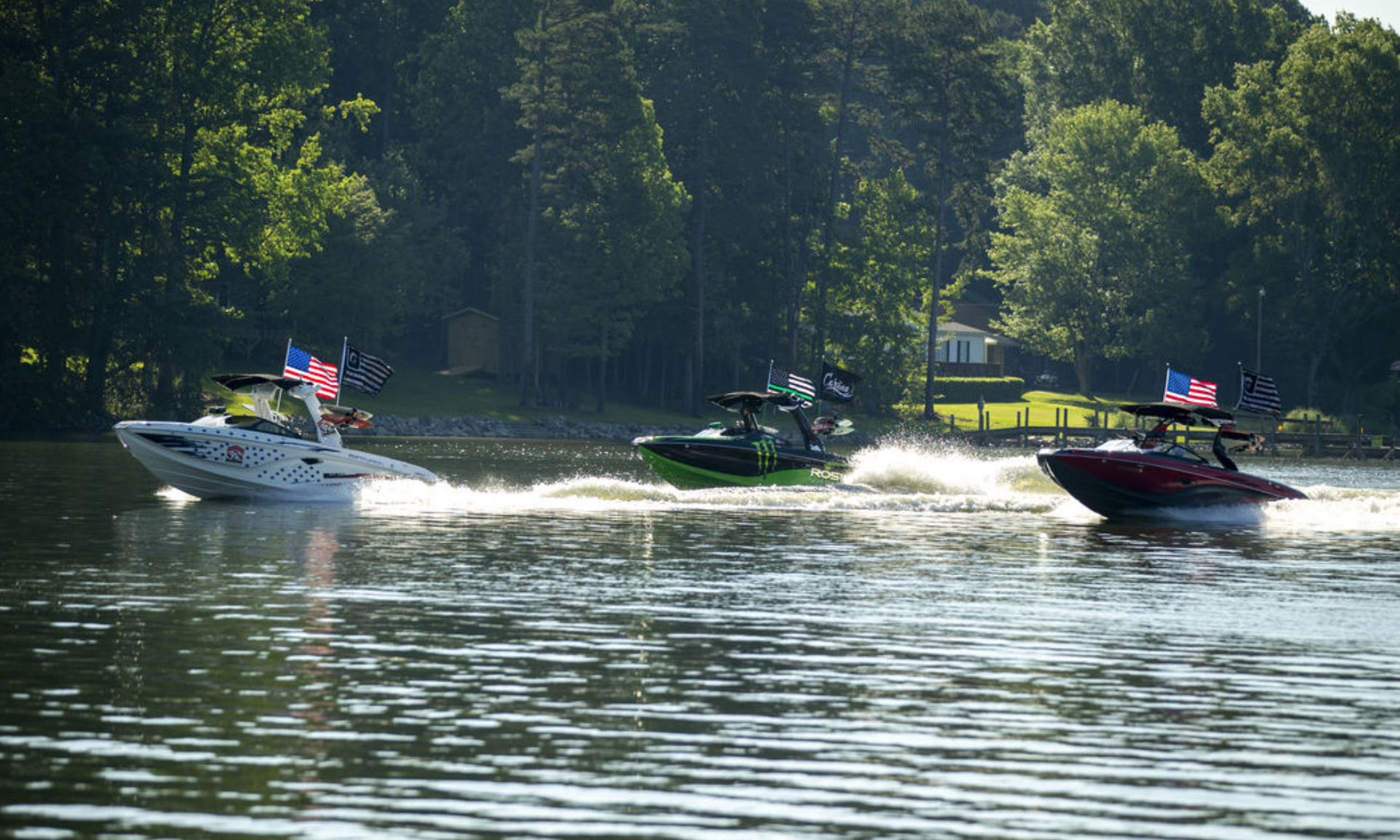 MOORSEVILLE, NC (June 30th, 2020) – Earlier this month Centurion Boats took part in the Fourth Annual Mooresville Salute to Service Operation Wake Surf event. Organized and hosted by Centurion Boats ambassador Robby Maschaupt the three-day event brings together twelve veterans and active duty service men and women for a relaxing and exciting few days spent with peers. The goal is to help attendees access their ‘Blue Mind’—a mildly meditative state characterized by calm, peace, unity, and a sense of general happiness associated with being in or around the water. The ‘Blue Mind’ isn’t just talk, leading industry researchers have found scientific connections between water and happiness which can lead to positive emotional, behavioral and psychological benefits.

Just ask Robby Maschaupt, “The water just frees my mind of everything. When I’m on the boat with them [the twelve, as Robby refers to them] I see that success, I see that smile, I see that confidence come. It’s just inspiring to me. It fills my heart and I believe it also fills their hearts.”

Day one of the event saw active and retired service members compete in go kart racing at Victory Lane Karting. Victory Lane Karting is the fastest indoor karting facility in the United States and can setup six different tracks all under one roof. After a morning of competing against each other the group headed to XCalibur Pit School to take their turn as professional NASCAR pit crew members. XCalibur Pit School is a program that trains professional pit crew members for NASCAR, over the last eight years their teams have collected over eighty wins including three NASCAR championships. The twelve military personnel were grouped into five person teams and raced for the fastest time changing four racecar tires.

The next two days were spent wakesurfing and sharing time together on the water. Boats were provided by Carolina Watersports & Marine the region’s local Centurion dealer. The attendees were grouped into three different boats with pro wakesurfers, wakeskaters, and coaches who help the twelve attack new challenges behind the boat. Progressing their skills and cheering on new friends these moments on the water often lead to impactful conversations among peers. This shared unity is a key part of salute to service, keynote speaker Matt Manzari commented, “At salute to service we bring active duty military personnel and veterans together with likeminded people. That’s one of my favorite parts of it, to watch them get into their comfort zone as everyone around them has experienced really similar circumstances to themselves.”

Matt Manzari attended the event for the second year to share his journey through significant hardship faced in his own life. Matt is a world renowned wakeskater that suffered two life altering injuries as a young man. Through perseverance and faith Matt miraculously recovered from these two separate injuries that should have cost him his life, and his outlook and path forward speaks to the struggles that we all face in our own lives. His inspiring message is right in line with what salute to service is all about, at the end of a salute to service event the hope is that service men and women go back home refreshed, rejuvenated, and more equipped to tackle life and the stressors and turmoil that it may bring.

This event is another instance of how Robby Maschaupt is waking positive waves of change and making lives better through Operation Wakesurf. By being in a boat on the water we have the opportunity to awaken a better life for ourselves and others even with the smallest of actions. Working together to Wake Waves of positive change is what we do, and this year these worthwhile pursuits are more important than ever.

About We Wake Waves: As a Correct Craft company, we are called to the path of ‘Making Life Better’ and we strive to exemplify that phrase at every opportunity. We want to wake waves of positive change in ourselves, our families, our communities, and our world with our boats on or near the water. It could be as simple and seemingly small as teaching your child to wake surf or showing your significant other how to trailer a boat or as big as hosting an event that honors our service men and women. What’s Your Wave? How are you using your Centurion on, near, or relating to water to wake waves of positive change? We wake waves. Do you? Share your wave with us on social media using the hashtag #WeWakeWaves.