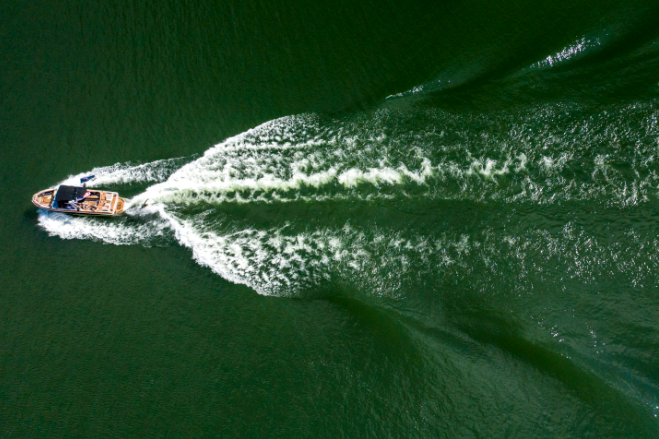 OGDEN VALLEY, Utah (September 6, 2019) – Day Two of the 2019 Centurion Boats World Wake Surf Championship, presented by GM Marine, continued with an exciting round of surf style heats yesterday where athletes earned a chance to compete in today’s finals. Despite some stormy weather before the day began surfers threw down their best stuff as fans watched from the beach and from all over the world on the free online live feed. The live feed will be broadcasting finals until the end of the event today so tune in and don’t miss any of the ultimate round, as the season, and the championship comes down to this.

As a quick refresher, according to CWSA sanctioned rules, heats at the WWSC work like this; riders are split into two groups where they compete against each other and the top two riders in each group win a slot in finals. In addition, at the end of the day riders in Pro and Outlaw divisions that did not earn a slot in the finals compete in a Last Chance Qualifier round where the top rider earns a wildcard bid to the finals. Centurion Team riders Ashley Kidd, Jake Breedlove, Zoey Montgomery, Connor Burns, Keenan Flegel, and Zane Montgomery all earned bids in their respective divisions. There’s also some very juicy storylines to follow throughout today’s finals.

After trading podium spots between first and second throughout the season, teammates Connor Burns and Keenan Flegel both finished first in their heats and will meet again in the World Wake Surf Championship Pro Men’s Finals. Keep an eye on Burns as he attempts to win his second straight Pro Men’s Surf title while Flegel tries to take the championship back.

Speaking of Flegel’s first place chances, he’ll have two shots to win big today as he qualified for finals in both surf and skim style divisions. Keep an eye on the former world champion as he tries to unite the crowns of Pro Men’s Surf and Pro Men’s Skim with dual championships.

The number one and number two ranked Pro Women’s Surf riders in the world have long traded the top podium spots in a compelling rivalry, today it comes to a head on the world’s biggest stage. Catch Ashley Kidd and Cassidy Gale as they go big on the world’s best wave with an eye towards a first-place finish at worlds.

After tight heats in the Pro Men’s Surf and Outlaw Women’s Skim divisions’ both Zane and Zoey Montgomery found themselves on the outside looking in as they both just missed qualifying for finals. Zane was in a particularly difficult heat with Centurion teammate’s Connor Burns and Jake Breedlove competing in the same group. However, the Last Chance Qualifier was a different story. The Montgomery siblings threw down and earned their way through with wildcard bids.

Centurion Boats team riders dominated the day yesterday, and the Pro Men’s Surf finals will feature a total of four Centurion Boats athletes. Connor Burns, Keenan Flegel, Jake Breedlove, and Zane Montgomery fill out four of the five slots in this division’s final round. All eyes will be on the group as anyone of these surfers could rise up to the top of the division for a world championship.

You can view all surf style finalists in the Outlaw, Pro, Masters, and Amateur divisions as well as a schedule for today below. Additionally you can see all skim style finalists here. Surfers are already tearing it up in finals and you can catch all the action on our free live stream here. Don’t forget to check back later for a recap and results!