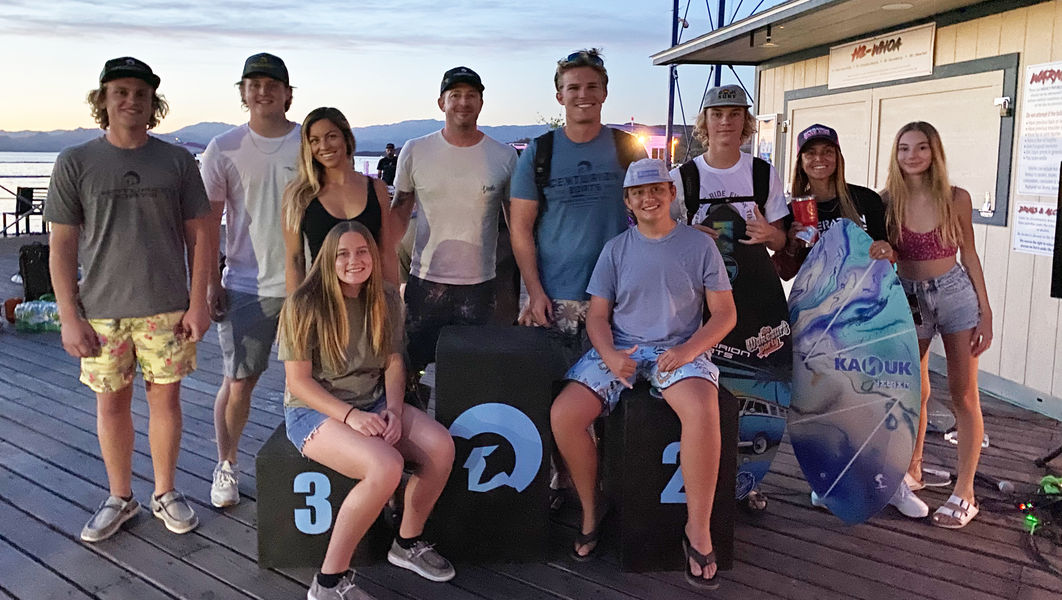 Peoria, AZ (April 27th, 2021) – The first live Wake Surf competition of the 2021 season, the Wildwest Wake Surf Shootout presented by Century Marine, took place this past weekend on Lake Pleasant in Peoria Arizona just north of the Phoenix Valley. The water conditions were ideal in the morning, but the wind started to set in as each competition day progressed. The wind was spinning up around 15-20 mph causing white caps throughout the lake on the competition course, however, this did not stop the Centurion pro team from dominating podium placements.

In the Pro Men’s Surf division Connor Burns was able to take home the W over current world champion and fellow Centurion Teammate Keenan Flegel in a close final run. For the last several seasons these two surfers have been trading the 1st and 2nd spot on the Pro Men’s Surf podium but on his home lake Connor was able to secure victory. Burns pulled off one of his more difficult tricks, a 540 big spin, that he’s struggled to land in much easier conditions, it was a feat to see considering the wind on the course. It’s not clear if the home field advantage aided Connor in his runs but it couldn’t have hurt. Keenan will look to retake the top spot on the podium at the King of the Lakes Classic in Minnesota later this season as two of the best in the world continue to push each other and progress the sport wakesurfing.

In Pro Women’s Surf Ashley Kidd was able to pull out 1st place in her first competition this year. When asked what’s next after winning Pro Women’s Surf at the Wildwest Wakesurf Shootout, Ashley Kidd noted, “I’d like to learn some new tricks that I’ve never landed before and hopefully win worlds!” If Kidd does win at worlds it would be her 6th world title.

The Pro Men’s Skim division also saw some competitive action between Centurion teammates as Tyler Stewart edged out Keenan Flegel for the top spot on the podium on day 2. Keenan led the Pro Men’s Skim division after the first day of competition but Tyler’s impressive run on day 2 gave him the late edge. Over on the Pro Women’s Skim side, Ashley Inloes secured victory over Bailey Dunn and Centurion Team rider Caitlin Wheeler.

Nicole Hudson who served as head judge for the event, said, “It’s been so awesome to see all of our riders congregate here in the desert and on the lake behind that Ri265. It’s so great to be back and to see so many smiling faces while we see everyone throw down here in the desert.”

Amy Mauzy, Vice President of Marketing and Sales at Centurion Boats had this to say, “I felt so blessed to be able to attend the Wild West Wake Surf Shootout hosted by Century Marine at Lake Pleasant Marina, Arizona. This was the first in-person wake surf event we have had the pleasure to tow in 2021 and we couldn’t have chosen a better kick-off to the season. The attendance was amazing, the venue was extremely accommodating, the event execution was some of the best I have ever seen and the Centurion Ri265 performed flawlessly. Podium finishes and personal bests proved that this was not only the first event, but maybe one of the best, even this early in the season. We were stoked to be the official tow boat.”